Part 1 of this series introduced the importance of small business (SMB) to make sure that their web-based apps are created and run using secure source code. Remember, the Cyberattacker of today is not just going after servers and firewalls. They look for any possible way to get in, including finding backdoors and other weaknesses in the source code.  Now we will continue with this topic and provide recommendations for avoiding this kind of situation.

SMBs that make use of Development Libraries often fail to allocate the sources necessary to run audits on the source code. The bottom line is that “. . . everyone seems to think that someone else will find the vulnerabilities and what is published is secure.” 1

It has even been discovered that by using a Development Library, an average of 24 vulnerabilities are introduced into the source code, 40% of which are deemed to be critical.1

There are several reasons why Development Libraries have so many vulnerabilities:

The following are examples of security flaws that have been discovered:

How to avoid vulnerabilities found in software development libraries

There are three proactive measures that an SMB can take to avoid vulnerabilities in software development libraries:

The illustration below 2 depicts some of the best practices an SMB should implement to ensure that the Software Development Libraries they utilize are free from any security gaps or vulnerabilities: 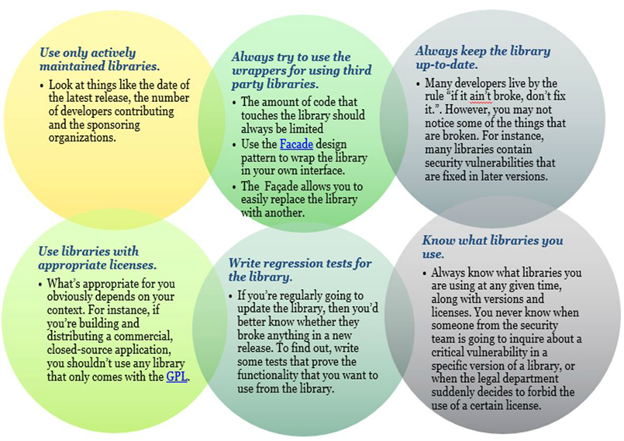