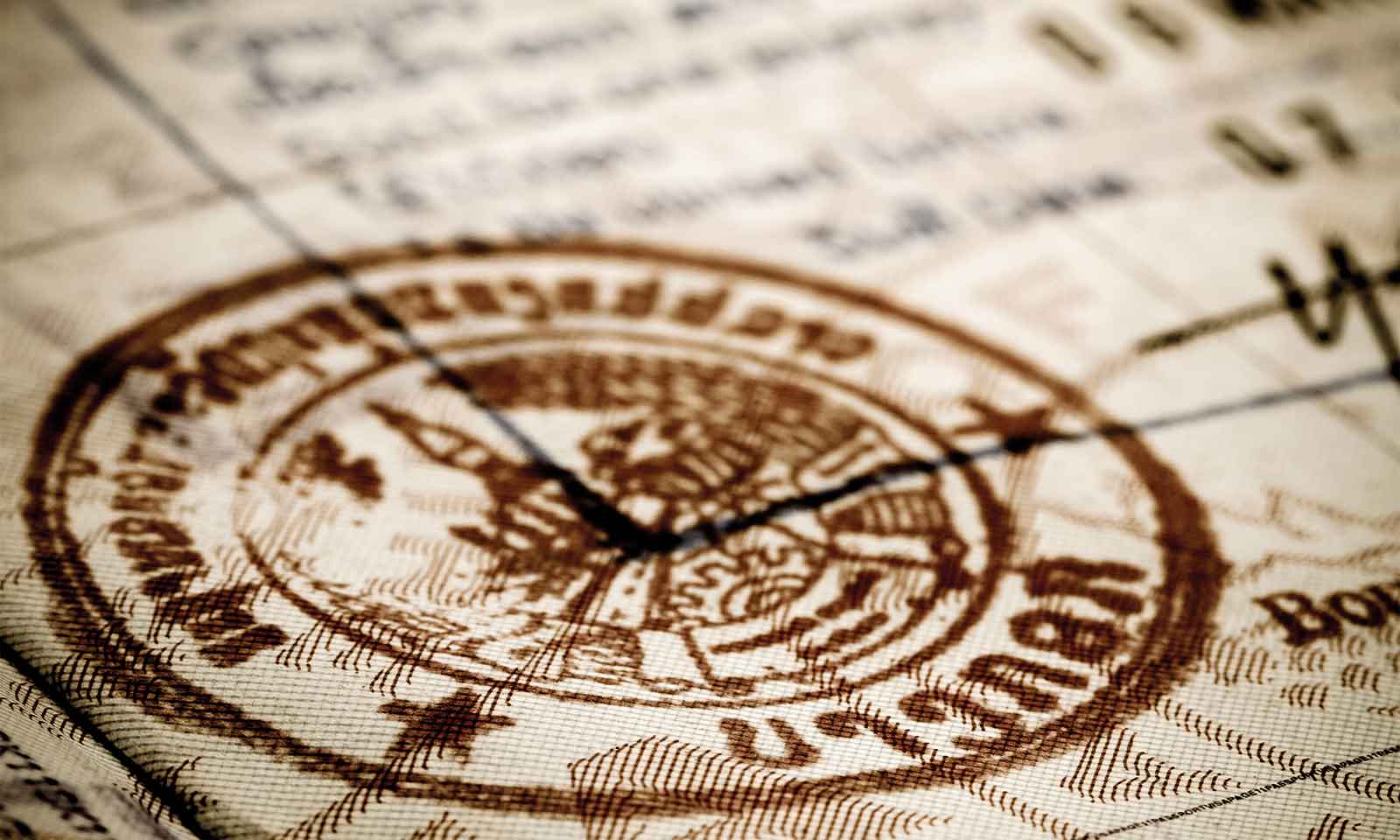 It was in 2003 when I bought my first old passport at a flea market in Kyoto, Japan. It was a wonderful Japanese document from 1934 showing a beautiful young woman in her kimono; a real piece of art compared to the modern standardised travel documents we all use today. The research on and collecting of old passports has been my passion ever since, and my collection and knowledge is constantly growing. I also promote passport collecting as a leisure activity as often as I can, and will give you some tips on how to start a collection of your own.

The world is flat, at least when we look at the country stamps and visas in travel documents. But there is more to explore and to consider, much more…
Passport collecting is not a new leisure activity. I know collectors who have been into this hobby for 30 years or more. But of course collecting old passports is unusual, to say the least. To me, an old passport is a piece of art, when I look at the handwriting, colourful border stamps, revenue stamps and passport photo. A unique or unusual passport photo can very well be a reason why I want to add a passport to my collection. Old passports are history and they tell you something about the travels someone made maybe centuries ago. For me passport collecting is a most fascinating leisure activity, resulting in the foundation of my website www.passport-collector.com in 2010, through which I have built up a global network of collectors.

The beginning of a passport system in Europe
The years 1789 and 1792 were two marks in history that have dramatically influenced the political landscape in Europe in general and the passport system in particular. The start of the French Revolution in 1789 and the beginning of the Coalition Wars were leading Europe into territorial and political turmoil which lasted for 26 years. In 1792 France introduced a widespread system to control emigration and immigration. With a decree from the Convention dated 1 August 1793, aliens were forbidden to enter France without a relevant ID or travel document issued by the French authorities. Non-compliance resulted in arrest.

Historically significant passports in my collection
My passport collection contains a number of historically important and valuable documents. I have described two of those below.

German passport
I have a late 19th century German passport in my collection that is a great example of what was already possible in terms of security features at that time – at least in Germany. The document, printed by Giesecke & Devrient in Leipzig, is a passport booklet from the Kingdom of Saxony (see figure 1). It was issued in 1866 and is one of the earliest passport booklets I know. Before then, passports were large, often folded, folio documents. The booklet contains the following security features:
• Sealed colour thread binding.
• Microprint.
• A coat of arms watermark.
• Embossed graphics and letters.

The booklet does not contain a photo. Passport photos started to appear in travel documents at the beginning of the Great War, and have been a mandatory feature since then. In Germany, for example, it was decreed by law on 1 January 1915 that passports should include a photo of their bearer.2

British passport
My collection also contains a British passport which is historically significant see slideshow below. It belonged to the Right Honourable Arthur Henderson, MP (1863‑1935). Henderson was one of the chief organisers of the British Labour Party, and Secretary of State for Foreign Affairs from 1929 to 1931. In 1934 he won the Nobel Peace Prize for “his work for the League of Nations, particularly its efforts in disarmament”.

Henderson’s passport is a significant document of 19th century British history and it is in excellent condition. It was presented in the BBC TV programme ‘Antiques Road Show’ in 20113 and came into my possession by chance when a family member contacted me via my website. It is not every day that you get offered a document of such importance and I am very happy to have it in my collection. 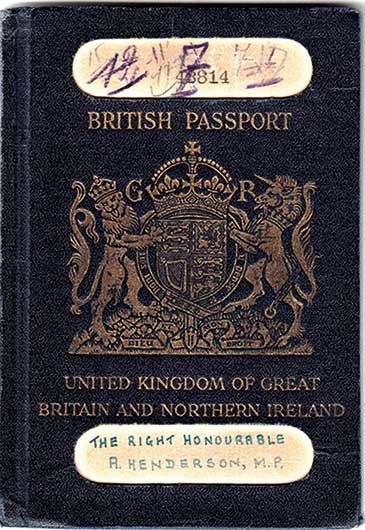 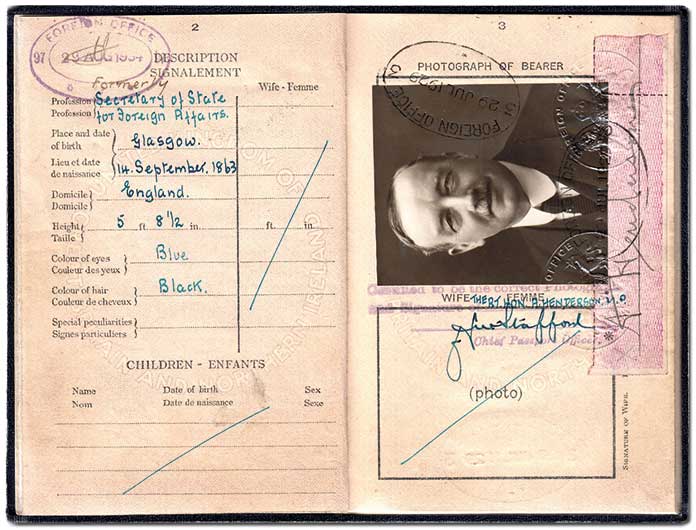 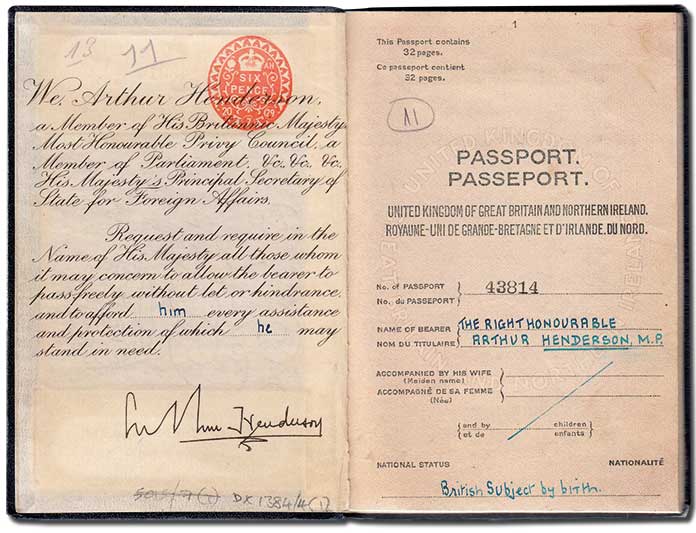 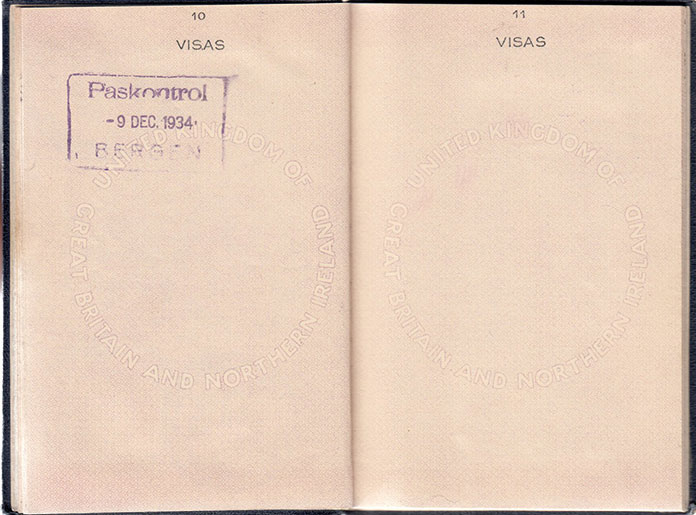 Tips on passport collecting
Passport collecting is most educating as you learn a lot about geography, history and politics. However, it is also important that you already have some kind of knowledge in these areas to evaluate a travel document correctly. Below are a number of tips that might help you start your own collection.

How to start
If someone wants to become a serious collector of passports I always recommend collecting quality instead of quantity. Although collecting is a leisure activity, you are also investing money. No matter what you collect, quality items are always preferable as they have both a historical and economical value.

What items to collect
I recommend to set a collection focus which you can extent over time. If you start collecting everything, you will quickly lose sight of the overall picture. I do not collect ID cards or other travel documents, but focus solely on German passports of any period, including East German passports. My collection still lacks some German Empire passport booklets of the smaller states, such as Waldeck-Pyrmont, which are very hard to find. Other collectors only collect for example diplomatic passports or consular passports (passports issued abroad).

Where to find collectables
Your local flea market might be a good place to start, and also online auctions sometimes offer old travel documents. In time you will be able to start your own collectors’ community or join one where there is the possibility of swapping documents. The classic auction houses are a good source too when it comes to mid and high end collectibles.

Value
There is no such thing as a catalogue for passports, as there is for stamps and coins, where you can look up the value of a certain item. It’s a matter of supply and demand and, understandably, high quality and rare collectibles will always fetch a higher price – a common rule when it comes to collecting in general. Over the years I have built an extensive database on old passports, including the frequency of occurrence, photos, and collector’s value, which is consulted frequently by other collectors.
The most expensive passport sold nowadays was the US passport of baseball legend Lou Gehrig, for which a passionate collector paid the sum of USD 263.000. Celebrity passports will often fetch much more money than historically significant travel documents – especially in the USA. Examples of collectibles in a six‑figure range are the passports of Marilyn Monroe, James Joyce and Albert Einstein.

Literature on passport history and collecting
There are hardly any books available on the topic of passport collecting. A handful of ‘passport books’ are listed on my website, where you can also find guidelines written by myself and experts from the collectors’ community.

Legal aspects
Passports are government documents: you don’t own your passport – you are just its bearer. When you argue that you have paid for your passport, take a moment to open it and read it closely. You most probably will find a statement saying that the passport is property of the issuing country. Even if this is not stated in the passport itself, you will find words to that effect in the passport act of your country. The money you paid at the passport office is not a purchase price – it is a processing fee.
I do cooperate with passport authorities to reach the best possible legal security when it comes to passport collecting – different countries have different rules. Passport collecting is a legal activity, as long as you have a valid reason for it, such as for history, research, or leisure, and as long as the documents are old and obsolete. A more detailed statement on the legal aspects can be found on my website.

Summary
Collecting old passports and other travel documents is fun and most educating. With this article I hope to have given you a refreshing and entertaining glimpse of how much I enjoy this hobby. I see the art and beauty in old passports, as some documents are truly an artwork when it comes to handwriting, stamps and passport photos. Old passports are historical objects which tell you something about the travels someone made maybe centuries ago. For me passport collecting is a most fascinating leisure activity, which has the benefit of preserving historically important travel documents. When do you start your collection?