Keesing Platform
Home Premium The Euro: 20 Years of Cashing in on Holograms 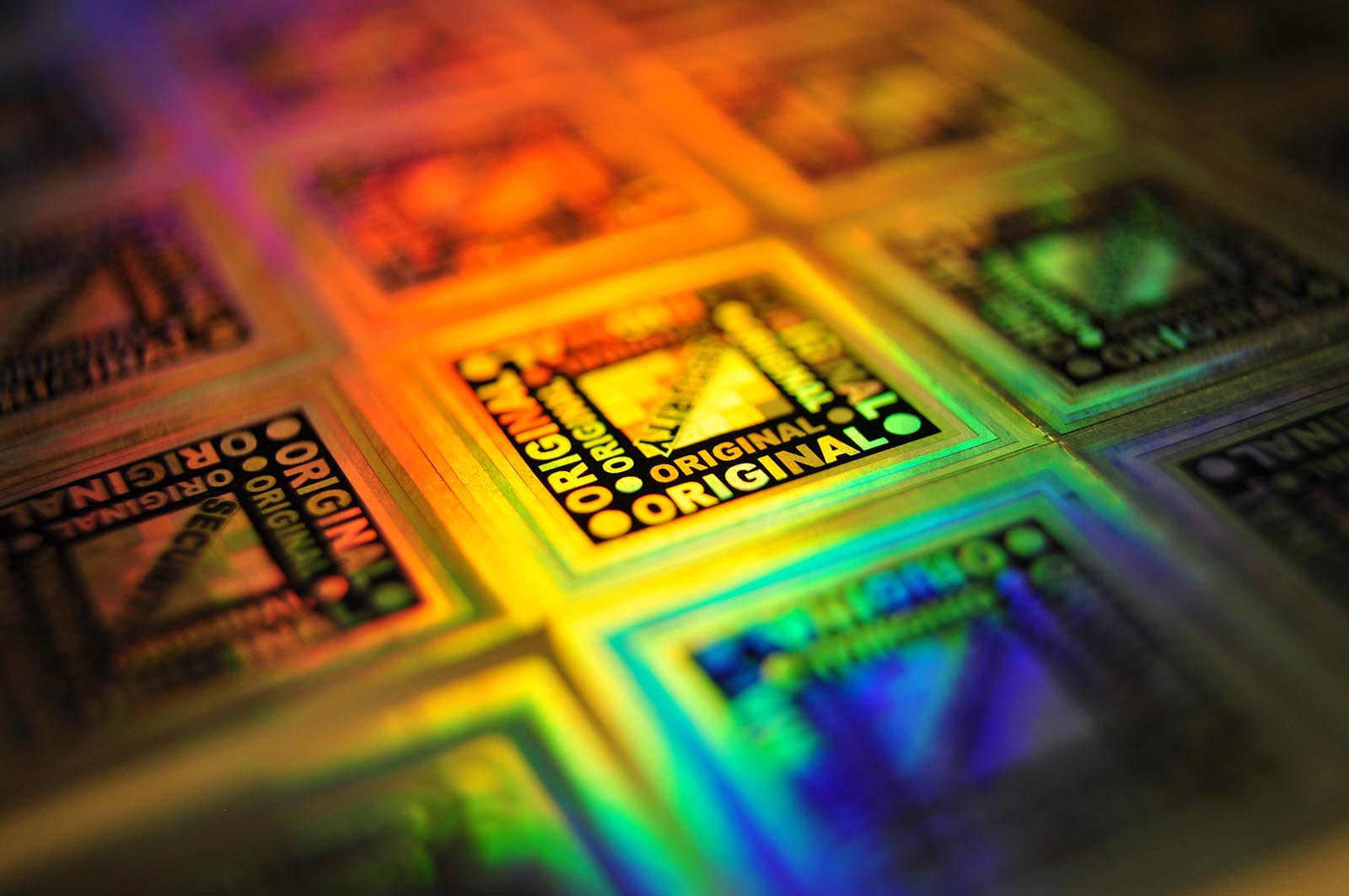 To understand why the European Central Bank (ECB) decided to place holograms onto the euro as an anti-counterfeiting feature, you have to go back to the first reports of colour photocopiers being used to counterfeit banknotes, which came at Interpol’s 6th International Conference on Currency Counterfeiting (Madrid, 1977). The resolution, contrast and colour fidelity of office copiers had improved to the extent that casual counterfeiting of the printed features on a banknote had become a reality, forcing the security print industry to react.1

The first diffractive optically variable image devices (DOVID) to be used on banknotes was the Reserve Bank of Australia’s note, in 1988, commemorating Captain Cook’s discovery of Botany Bay and then the Austrian National Bank issuance of a new high denomination 500 schilling note. Following this, progress was initially slow as many technical challenges, as well as the reluctance to accept DOVIDs as secure features, had to be overcome. The next significant development, in 1991, was the issue of the 20 Markkaa from the Bank of Finland with a 2 mm wide DOVID security thread using holographic film supplied by Applied Holographics PLC, and by 2000 the ECB had decided to use DOVID technology on the new euro. This raised the number of countries issuing banknotes with DOVIDs to 31, with a total of some 80 denominations in circulation.

Indeed, the most significant driver in the widespread adoption of DOVIDs on banknotes was the decision to include them on the euro, launched in 2002, as a security feature. This move has been heralded as the successful culmination of a very thoroughly researched banknote – from concept to design – followed by a well planned and executed production and distribution project.

The presence and quality of holograms on the euro confirmed that the age of anti-counterfeiting technology for banknotes had truly arrived, and in excess of 13 billion notes were issued in the first year alone with every domination featuring a DOVID with stripes on the three lower dominations (€5, €10 and €20) and patches on the four higher denominations (€50, €100, €200 and €500).

The devices used on the euro are far more complex than the ones featured on the earlier banknotes. In addition to rainbow colours, these KINEGRAMS on the lower denominations and Alphagrams™ on the higher denominations, mastered by OVD Kinegram and Hologram Industries (now SURYS) respectively, contained dynamic imagery channelled to show different graphic designs at different angles.

Such complexity presents challenges in describing and explaining them to specialist examiners and the general public. The European Central Bank (ECB) communicated the salient visual features through an extensive public education campaign using the strapline ‘Look, Feel, Tilt’, contributing to their success as a secure public feature, and the increasing complexity of imagery to provide high security has continued unabated. The simplicity of this message was so successful that it, or variations of it, are now widely used around the world by other issuing authorities.

At the 2002 physical launch of the currency, 12 countries with a total population of 308 million adopted the euro, and the ECB’s report on the ‘Evaluation of the 2002 cash changeover’2 calculates that frontloading of banknotes by credit institutions to residents of the euro area required 13.25 billion notes. And as there was a DOVID on all of the denominations this demanded a roughly five-fold increase in the European capacity for banknote quality devices—the largest use of DOVIDs to date.

In retrospect, the decision to use DOVIDs for the euro, their sophistication and their successful application on the banknotes at high speeds, must be seen as a huge vote of confidence in the technology, paving the way for other central banks to adopt holograms as effective anti-counterfeiting solutions for their own new banknote programmes.

It is impossible to isolate the effect of the use of DOVIDs from all other factors, on the security of the launch of the euro. Prior to the currency’s launch there were media scare stories warning of the risk of a wave of counterfeits of the new, unfamiliar, banknotes. However, up to the end of February 2002, a total of only 1,485 counterfeits, all of very poor quality, were reported by the national analysis centres of the participating countries. In the words, of the ECB evaluation report ‘Clearly, the potentially serious risks posed by a flood of counterfeits at the start of the year [2002] did not materialise. The level, when compared with previous experience with the legacy currencies, has indeed been very low’.

It is accepted best practice among banknote issuers to refresh or redesign banknotes every 7-10 years to keep ahead of counterfeits. After ten years, euro banknotes underwent a refresh, with the addition of new imagery (notably in the form of a portrait of the eponymous mythical goddess Europa, after which the series was named, in the DOVID, watermark to add a quasi-human touch) and enhanced security features, albeit that the overall design remained the same. The DOVIDs on the two lowest denominations were replaced with registered diffractive stripes. In the other denominations, these were overlaid over an aperture in the substrate to create a ‘window’, with different holographic effects visible either side of the note. The first notes in the Europa series went into circulation in 2013. 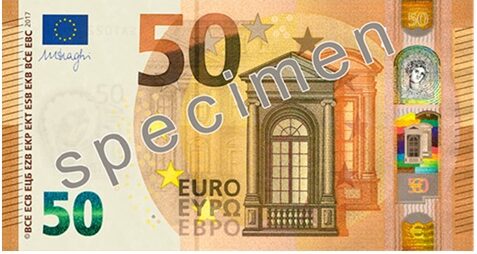 Again, the fact that the ECB retained DOVIDs in this second series was a solid endorsement both of their value as first line security features, and the way in which the technology is continually being upgraded and enhanced to offer additional anti-counterfeiting and authentication capabilities.  This has been borne out by studies, notably the Dutch central bank, that the feature is the second best in public recognition terms after watermarks.

Now, the euro banknotes are facing a redesign for the first time since their launch two decades ago, with a desire to make the currency ‘more relatable to Europeans of all ages and backgrounds’. There’s little doubt that holography will continue to feature in a move that signals a vote of confidence in the staying power of the euro by the ECB’s Governing Council, which wants to see innovative and secure banknotes that connect with people right across Europe. Indeed, the latest Study on the Payment Attitudes of Consumers in the Euro Area (SPACE) confirmed that cash was the most popular means for people to pay for retail items in-person in 2019.

And as part of its Cash 2030 strategy, the Eurosystem is taking concrete steps to ensure that cash continues to be available and accepted as a means of payment well into the future. The ECB Executive Board wants to develop euro banknotes that people can identify with and will be ‘proud’ to use, with member Fabio Panetta adding: “The process to redesign the euro banknotes will run in parallel with our [ECB Executive Board] investigation on a digital euro. Both projects aim to fulfil our mandate of providing safe and secure money to Europeans.”

The net number of euro banknotes in circulation stood at 28 billion pieces as of September 2021. The number of EU countries that have adopted the currency stands at 19 (with two more, Croatia and Bulgaria) set to join in the next couple of years. At the end of the first year following its launch, when it was used by 12 member countries, the volume was 15 billion.

As we look forward to a new age for the euro, one thing is clear: the role of banknotes in any payments eco-system and the need for secure, cost-effective features that the public recognise remains as strong as ever. The difficulty holograms present to criminals and counterfeiters cannot be overstated; indeed, a third of all current banknotes in circulation (327 to be precise) now feature a DOVID. And that is why they will continue to be used by the ECB and other banknote issuing authorities for years to come.