In January of this year, the European Central Bank (ECB) unveiled the full design of the new EUR 5 banknote. This banknote is the first of the second generation euro banknotes, which will be introduced across the euro zone as of 2 May 2013. In the case of the EUR 5, the new design does not surprise because it closely resembles the old design. In this article, besides revealing the reasoning behind this, Hans de Heij will discuss the differences between the old and the new EUR 5, as well as give us some background on different design policies.

New banknote designs continue to fascinate. When the ECB unveiled the full design of the new EUR 5 in January of this year, what was intriguing about the new banknote design, is that it so closely resembles the old design. The explanation for this lies in the fact that the Eurosystem has followed the upgrade policy of the two other world currencies: the US dollar and the Japanese yen, instead of following the European tradition of designing something completely new, as is the case with the Swiss franc. Where the dollar design follows the motto ‘Maintaining the look and feel of the dollar’, the Swiss banknote designers are guided by the future, captured by the theme ‘Switzerland open to the world’ for the 2005 banknote series. A number of other European countries are working on completely new banknote designs. Figure 1 provides an overview of seven new series of banknotes, including the new EUR 5.

Replacement frequency increased by digital revolution
Several central banks, such as those of the USA and South Africa, consider the life of a banknote design to be seven years. The Eurosystem anticipated a similar circulation period and in 2003 initiated the development of the second series of euro banknotes, one year after the introduction of the first. Why is it that central banks became so keen on a higher replacement frequency? Before 1990, central banks were used to keeping their banknote series unchanged for several decennia. Examples of these include the German mark, the Japanese yen and the US dollar. Others had a series replacement frequency of 12 to 15 years, as was the case with the Dutch guilder. Increasing the replacement frequency was triggered by the digital printing revolution which started in 1987. In this year, Canon introduced its first digital full-colour copying machine , the CLC-1, which used standard paper. With this machine, a proper banknote reproduction could be made within one minute. This development required an instant reaction from the central banks, and most of them decided to add so-called anti-copy features, such as glossy foil, a glossy ink and a windowed security thread: features that could be incorporated within the existing banknote design.

In the years that followed, the digital revolution continued with the diffusion of home printers (1990), home scanners (1995), image software (1998) and internet access (2000). The introduced add-on features had to be improved on a regular basis to keep up with the digital revolution, and while the banknotes decreased in size, they received increasingly complex public security features using multiple levels of nesting: a-feature-in-a-feature-in-a-feature. The glossy ink (level 1) got a colour switch (level 2) and the colour switch a rolling bar (level 3). Similarly, the glossy foil (level 1) acquired a hologram (level 2) and a transparent window (level 3). On the other hand, central banks maintained traditional features, such as watermarks, gravure printing (intaglio), see-through registers and microtexts.

Since the year 2000, the graphic reproduction industry developed further, mainly focussing on higher resolutions and improving the colour gamut. Although such serious threats as in the 1990s are no longer appearing – making it difficult to target new features – there remains a general feeling among the central banks that their banknotes should be replaced frequently. 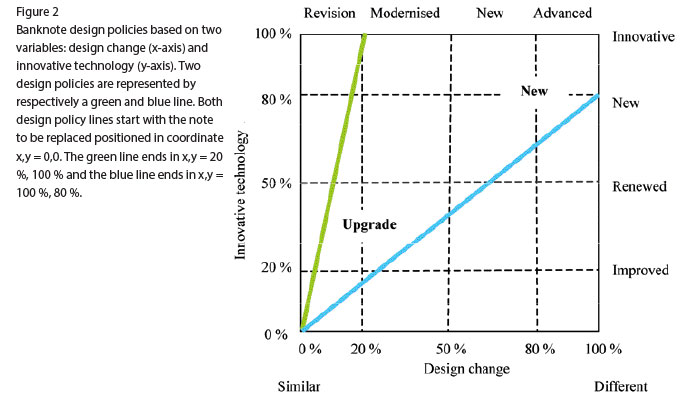 New or upgrade?
With regard to the second series of euro banknotes, the Eurosystem had to decide whether to go for a new design or to upgrade the existing one. Basically, there are two drivers to target a new banknote design, as shown in figure 2:

In this two-dimensional space, central banks may take a position when deciding about a new design. With a design revision and no innovative, ‘quantum leap’ security features, the EUR 5 stayed close to home. Similar to the US dollar and Japanese yen, the new euro is positioned in the upgrade area of figure 2. Smaller central banks, such as those of Denmark and Switzerland, seem to profile themselves in the upper-right area, since they come with new and/or advanced designs. Nowadays, when central banks renew their security features, they usually choose features that have been selected by other central banks as well, such as threads with floating images (Denmark, US dollar) and colour changing inks with a rolling bar, which is applied in the numerals of both the new South African notes and the new EUR 5. The green rolling bar makes the new 5 less grey and will probably improve the Dutch judgement that the existing 5 euro is an ugly banknote (59 % ugly, 2011).

Design policies: all about priorities
Basically, any banknote has four functions:
1. value recognition
2. handling
3. authenticity check
4. communication message
Set in this order, the design policy is a ‘user-centred design policy’. When the authenticity check is leading, the bank follows an ‘authenticity design policy’, the direction followed for the new euro series, as stated by the ECB in its press release of November 2012: ‘The Europa series has benefited from advances in banknote technology since the first series was introduced over ten years ago. Its security features have been enhanced, which will help to make the banknotes even more secure.
Durability is another popular design policy and under this header the new EUR 5 has received a varnish to increase its life. The public appreciates sustainable, ‘green’ banknotes, and by varnishing the notes, fewer banknotes need to be replaced and costs will be brought down. The revised EUR 5 remains the same size as the old design, measuring 120 x 66 mm. Since priority is given to security features, the EUR 5 does not deliver basic improvements concerning value recognition, especially important for colour-blind, partially sighted and blind people.
Value recognition is triggered by colour, large numerals, image silhouette and dimensions. Two of these denomination features, silhouette and dimensions, are kept similar to the previous note. The colour-blind require monochromatic and discriminating, vivid colours. Both the front and the reverse introduced green and other colours, including larger unprinted areas, which will make colour discrimination between the 5 and the 20 (blue) and 100 (green) more difficult. The large numeral on the front is an improvement to the poor situation of this numeral on the first 5 euro banknote, which competed heavily with the main image. However, modern banknotes should also include a negative numeral (e.g. Canada, new Swedish series).

Use of features
In general, the revision policy introduced in the 1990s created crowded banknotes, disparagingly called Christmas trees. The competition between the public security features made that not all of them were clear to the public. On average people are able to name two security features unaided, which, in the case of the euro, are the watermark and the glossy foil. To match the euro with these public preferences, the six public features on the old series were reduced to three on the new series, all to be found on the front (watermark, glossy foil and colour changing ink). The Eurosystem has now made a start with abandoning obsolete features: the new EUR 5 does not have a see-through register anymore.
However, the question remains whether people actually use the security features. About 15 to 20% of the public cannot recall a single feature and this group is most likely to grow, since people generally trust the banknotes they receive from an ATM. In the Eurozone, all ATM notes are checked on authenticity and fitness before reissue, as a result of the ECB decision on recirculation of euro banknotes in 2010. By paying retailers with these genuine ATM notes, the public receives lower denominations as change – notes which are hardly counterfeited. So, why would the general public be interested in public features at all? Instead of the public, the retailer is increasingly becoming the first line of defence.

Adding life to the euro
With regard to the communication message of the EUR 5, a portrait is introduced. With this introduction, the Eurosystem responds to the criticism that the euro banknotes lacked any sign of life, giving people the illusion that Europe is not about people, but about money (the word ‘euro’ occurs frequently on the note). The EUR 5 has received a face – an ancient portrait of the Greek goddess Europa – which can be found in two public security features (figure 3). The ‘Europa’ theme is an extension of the existing communication message, already containing several messages, such as Ages & Styles of Europe, openness to others, bridges linking people and present day Europe.

Conclusion
In conclusion, the new EUR 5 follows the general trend of other banknote redesigns. Europeans who would like to see a really new, future-oriented design for their supranational currency might be served when the policy for the third series of euro banknotes is determined. 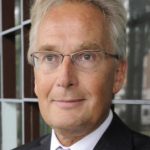 Hans de Heij works as an engineer at the Dutch Central Bank (DNB), where he was in charge of the introduction of five new guilder banknotes during the period 1981-1997. He pioneered the inclusion of public (consumer) feedback in banknote designs and has published several articles on the subject. Hans proposed the colour scheme of the current euro banknotes and led the contribution of DNB to the Euro design contest both in 1996 and 2006. In 2008 he started a Ph.D. on the subject of Using and Experiencing Banknotes.