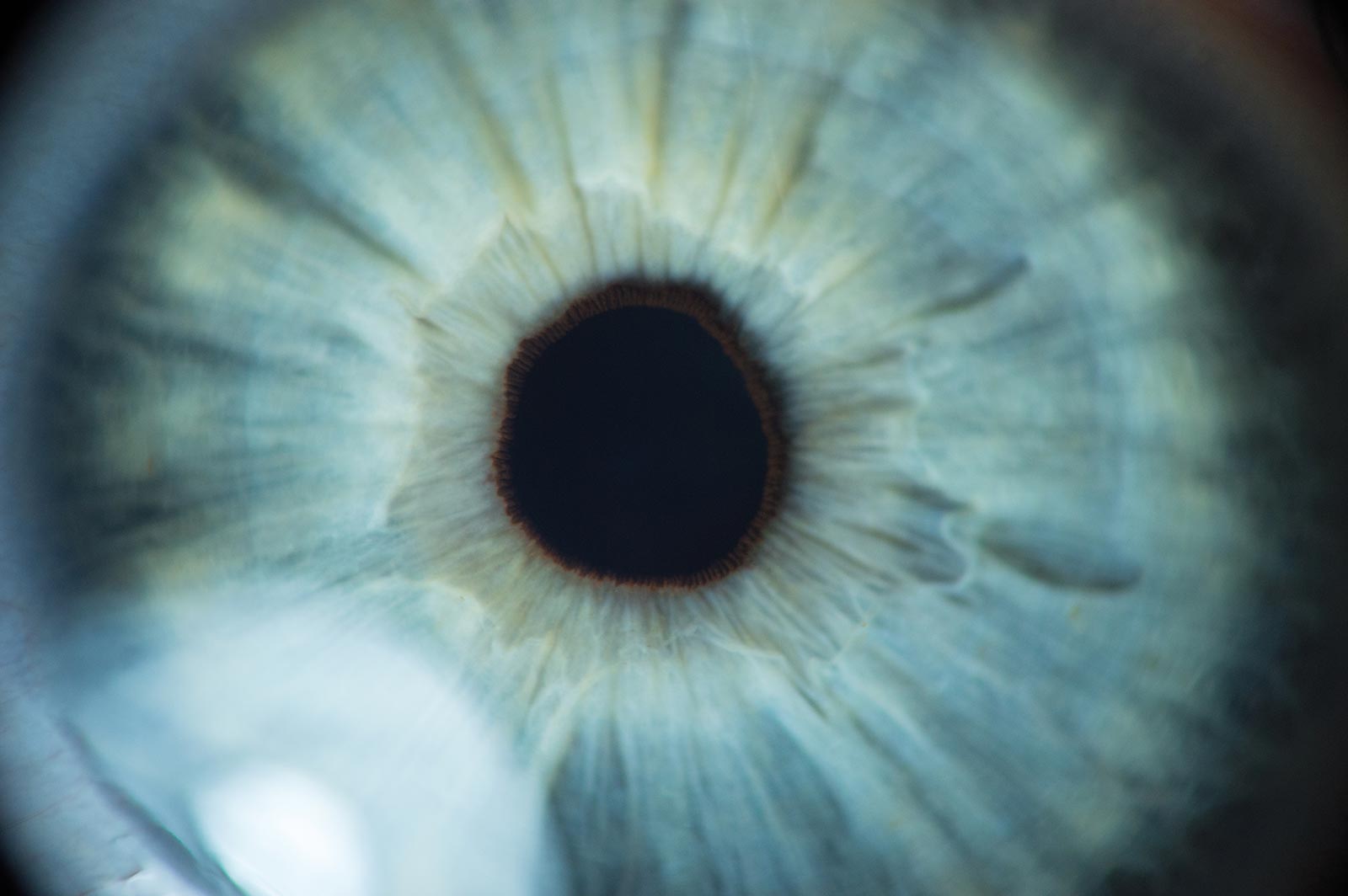 After the 9/11 terrorist attacks in 2001, the use of biometrics increased dramatically as a means of positively verifying and/or identifying an individual. For iris recognition technology, which has been around for quite some time, the most notable growth was also achieved in the last decade. In recent years many new iris recognition technologies have evolved, and the number of vendors in the market has grown significantly. In this two-part article, Ravi Das discusses what iris recognition entails.

The first part of this article in issue 41 of the Journal discussed, among other things, the physiological structure of the iris and the methods involved in traditional iris recognition. In this issue, the article continues with:
• Recent advancements in iris recognition.
• Market applications.
• Advantages and disadvantages of iris recognition.
• Final conclusions.

Recent advancements in iris recognition
During the last decade, the patents which fuelled the growth of iris recognition technology were held by just one company: Iridian Technologies, Inc. Only a few years ago, with the subsequent buyout of Iridian Technologies and the expiration of the original iris recognition algorithms patent held by Dr John Daugmann, the monopoly held over iris recognition technology was finally broken. Because of the release of this grip, much more research and development has occurred in this area of biometrics, and the number of vendors has greatly increased as well. Nowadays, there are many vendors, who all offer different types and kinds of iris recognition solutions. The primary advantage of this is that the exact needs of the customer can be met, rather than locking into just one solution and being forced to purchase upgrades over time in order to keep up with the technology.

With all of these advancements being made in iris recognition, there are three distinct trends now occurring in this area:

Iris On The Move
The technology used for capturing iris images of people in movement, known specifically as ‘Iris On The Move’, was developed by biometrics vendor SRI International Sarnoff. This cutting-edge iris recognition technology has emerged on two distinct fronts:

All a passenger needs to do is stand in front of a specialised gate which is equipped with iris recognition technology, have their iris scanned, and within seconds – after a 100% verification – they can enter the country of their destination. This technology is robust enough that up to 30 passengers can be verified in just one minute, and their irises can be scanned from as far as three meters away.

• Verification ‘at a glance’

Where with traditional iris recognition technologies an individual has to stand directly in front of an iris scanner, with the new technology they can stand 15 feet away from the camera, glance into it and have their iris scanned. This type of solution can process up to 12 individuals per minute, in a rapid fire succession method. This solution can be used both outdoors – under all types of weather conditions – and indoors in office-based environments, primarily as a second layer of security, thus replacing the technologies which have been dominant until now: traditional hand geometry scanners and fingerprint recognition devices.

Smartphone security
The next big technological advancement for iris recognition is that of smartphone security. Essentially, the smartphone is becoming an extension of both our personal and professional lives. We rely upon smartphones for just about everything we do. This can range from keeping in touch with our contacts and checking corporate email to making online purchases (mobile or m commerce). Thus, the need for a high level of security comes into demand, and not just using primitive security mechanisms such as a password and PIN. Just consider some of the following statistics which dictate the need for iris recognition technology on smartphones1:

Miniature camera
A leader in the development of iris recognition technology for smartphones is a vendor called Iritech, Inc. The company has developed a miniature iris recognition camera which easily fits into the top of the smartphone . A mirrored lens placed over the camera will help the smartphone user to look straight into it to get the iris properly aligned. A LED near the camera is added to provide the best possible illumination under any kind of lighting. To log into the smartphone, all the user has to do is point the camera towards their face, and look straight into it. The camera takes a photo of the iris, and verification will take place in just a matter of seconds.

Scanning of the sclera
Although not a direct development in iris recognition per se, a new breakthrough eye recognition technology is that of scanning the sclera. The sclera is the white of the eye, which contains numerous blood vessels, just like the retina (see figure 1). These blood vessels are distinct, and can be seen when looking at your eyes in the mirror. These blood vessels, which are embedded in the tissue of the sclera, can only be captured with a special camera. As each individual has a unique pattern of blood vessels in the sclera, this can be used as a means to confirm the identity of a particular individual. However, a major difference between scanning the sclera and iris recognition is that with the former, the individual has to move their eyes from left to right and back in order to capture the complete blood vessel pattern, whereas with iris recognition no movement of the eye is needed; all that is required to capture a robust image is a straight angle shot of the iris.

Five distinct steps are involved with the scanning of the blood vessel pattern in the sclera:

At the present time, this technology, of which the company EyeVerify is the primary vendor, is being primarily used on smartphones, in a manner similar to that of iris recognition. Thus, the scanning of the sclera can serve as an excellent and very robust two-factor level of security (also known as a multimodal approach) for smartphones, along with the use of iris recognition. The bottom line is that since the sclera surrounds the iris, this two-factor approach can work very quickly in a rapid fire fashion. As the other biometric multimodal solutions require different modalities, the verification and/or identification of an individual can take much longer, relatively speaking. 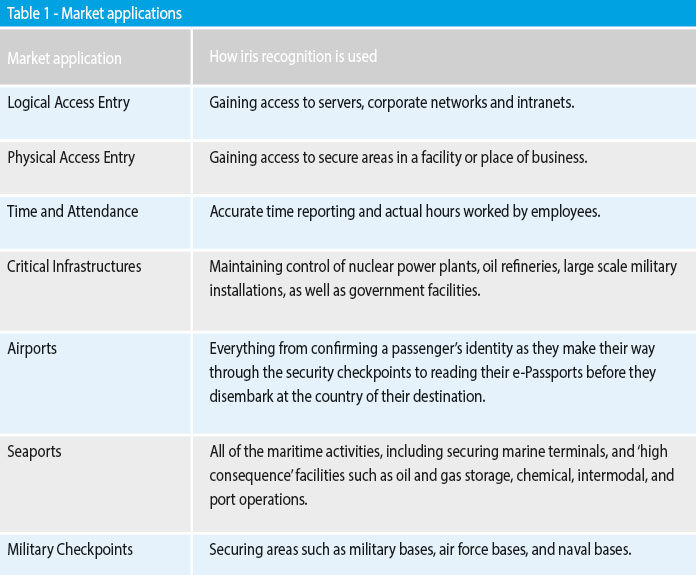 In the following two real-world examples, iris recognition is being used successfully.

Case study Physical Access Entry: Auburn University
Auburn University is a major educational institution in the United States which covers 1,841 acres, has 427 buildings, and has well over 30,000 students, staff, and faculty. The university’s athletic facilities allowed for people to enter these premises with traditional access cards. However, as many of these cards were lost or stolen, the costs of replacing them were escalating drastically. As a result, university officials turned to biometrics for an alternative solution. At first, hand geometry recognition was chosen, but it did not succeed over time for two reasons:

Because of this, iris recognition was chosen as the next alternative. So far, it has proven to be very successful, because the students, faculty, and staff just have to merely glance at the iris recognition system, and up to twelve people per minute can be verified quite easily. Even if the end user is wearing (sun) glasses or contact lenses the image of the iris can still be captured in great detail. Auburn University is the very first educational institution to implement an iris recognition system for this type of specific market application2.

Case study Time and Attendance: Union Pacific Railroad
Union Pacific is the largest railroad company in North America. It is 151 years old, has 33,000 miles of railroad track, and serves 23 states in the United States. In early 2001, voice recognition was implemented in an effort to drastically reduce call centre costs. While this has proven to be successful, another solution was needed to address the time and attendance needs of the company’s railroad worker gangs. These are the mobile labour work groups which are dispatched throughout the Union Pacific railroad network to provide improvements and regular maintenance to all of the railroad tracks. Their jobs are very labour intensive, operating in harsh environmental conditions and extreme weather cycles.
These railroad worker gangs work extremely long hours. In order to keep track of the hours worked, manual methods such as roll calls were used, but this greatly escalated the fear of worker fraud. Hand geometry as well as fingerprint recognition were looked at as viable solutions for the time and attendance needs. But because of railroad worker union policies, and the fact that the job is so laborious that it can actually even alter the physical appearance of the worker’s hands, iris recognition was looked at as the next viable solution, and was picked for three primary reasons:

So far, 40 iris recognition-based time and attendance units have been deployed by Union Pacific. The time/attendance data are processed locally, and then subsequently uploaded to central servers which can track labour data very quickly and easily. The obvious benefits are the quick payroll calculations which can be achieved, and the greatly reduced administrative costs3.

Advantages and disadvantages of iris recognition

The disadvantages of iris recognition can be described as follows:

Final conclusions
Iris recognition technology has truly come a long way since the beginning of the last decade. By the standards which are set forth today, the technology as it was used back then has become almost obsolete. It seems that iris recognition is growing on an almost continuous basis, serving even more customers as well as different types of applications. When it was first made available to the public, there were very serious doubts that it would ever pick up the momentum which we are seeing today. At that time, the technology was very bulky, and of course very expensive. With only one vendor serving the marketplace, the growth of iris recognition was very stagnant.

Nowadays, iris recognition is being used all over the world, even in the poorest Asian and African countries. At present, by far the biggest markets for iris recognition are those of large scale and massive deployments. These include government uses – especially in major theatres of military operations – and heavy usage in the major international airports, focusing on the e-Passport.

The next big untapped market for iris recognition is that of serving the security needs of the small to medium-sized enterprises (SMEs), which still predominantly use the traditional biometric technologies of hand geometry recognition and fingerprint recognition. As these SME’s look to upgrade these legacy biometric systems in the coming years, it is quite conceivable that iris recognition will be the next security technology to be deployed, to help further fortify and protect their mission critical assets. Finally, iris recognition will be a technology that will be around for a very long time to come, perhaps even replacing the market dominance held by the traditional biometric technologies.