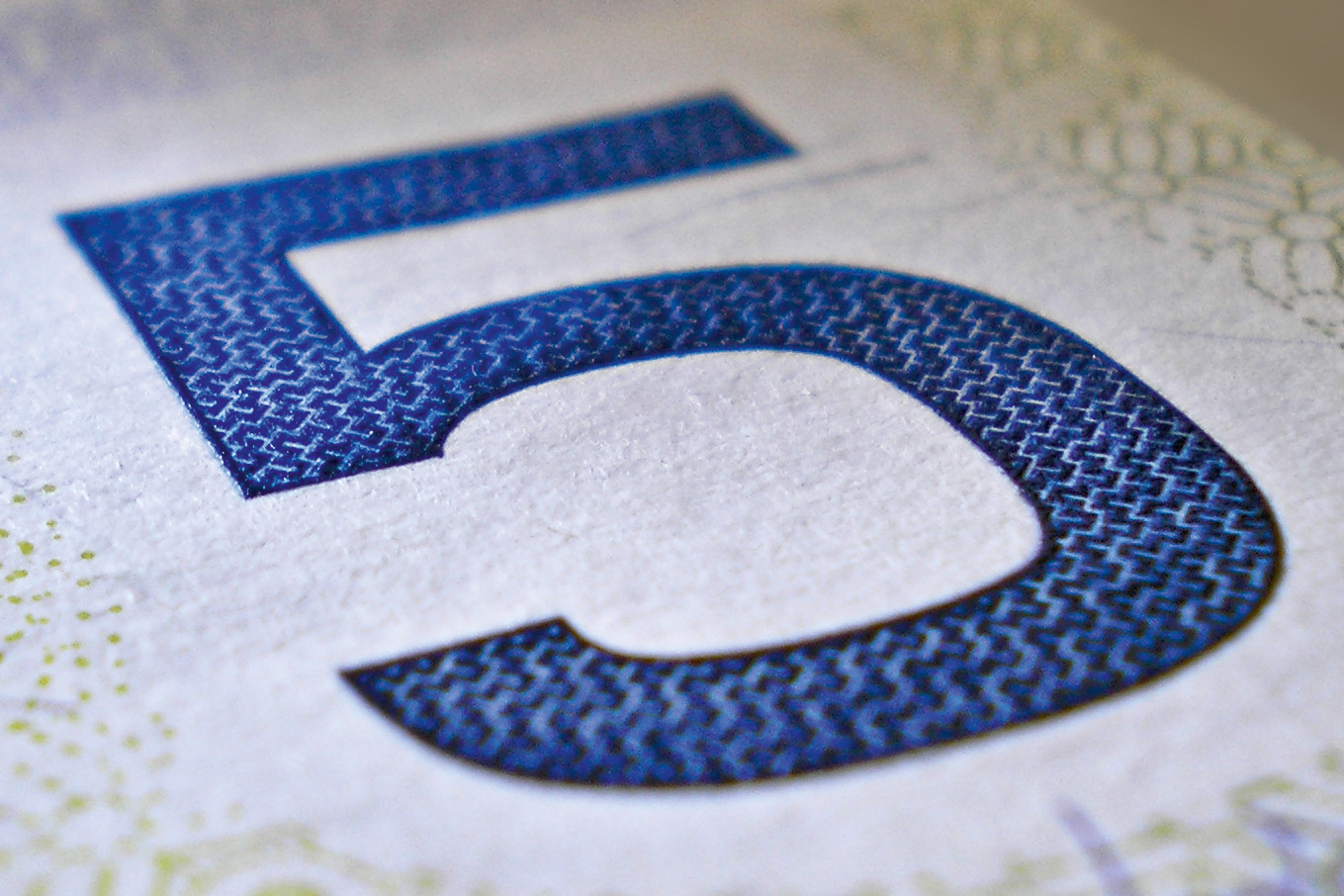 In this article a link is presented between visual and somatosensory receptive fields in the authentication of a document or banknote containing intaglio printing. Counterfeit security documents, especially banknotes, will always be a major concern for the central banks and the global economic stability. Intaglio has proven to be the most reliable and secure platform in the fight against counterfeits. This article focuses on the analysis of intrinsic features produced by intaglio printing based on human visual and somatosensory cortical systems and their technical modelling. The technical concept and model are supported by practical experiments. A number of remarkable results are highlighted in this article.

Counterfeit security documents, especially banknotes, will always be of major concern for the central banks and the global economic stability. The overwhelming majority of counterfeits are created with methods and equipment that are commercially available. The evolving and continuing progress in digital desk top technologies such as scanners, cameras and digital office printers, has created a completely new class of ‘digital’ counterfeits. Counterfeits printed with commercial offset printing presses are common in large-scale operations. These counterfeits are printed either in screen offset (standard Raster Image Processor, RIP) and/or line offset together with supplementary methods such as screen printing. Genuine banknotes are created with ‘features’ that combine printing and application processes that are not commercially available. The production process exploits the fact that materials, etc. are manufactured in controlled and trusted supply chains. They contain at least a high-precision simultaneous offset background, sophisticated multicolour intaglio and letterpress numbering. In addition, specific processes in hot stamping (for foil) and screen printing (for special effect inks) are used.
Skilled persons with some knowledge of the processes involved in the production of banknotes and other security documents do not have much difficulty in distinguishing genuine documents from most counterfeit documents. By scrutinizing a counterfeit document with such simple means as a magnifying glass it is typically possible to immediately identify the distinctive features of genuine security documents, for example the already mentioned intaglio-printed security patterns present on most banknotes.

Intaglio has proven to be the most reliable and secure platform to protect against counterfeits. Though the intaglio features are not consciously recognized by the public, the unmistaken optical appearance in combination with the unique tactile properties ensure that the genuine notes are normally recognized. Nowadays the high-definition banknote intaglio process (design origination, plate-making and printing) is well-guarded against the use and abuse in commercial applications.

As well as being important for the security of banknotes, the intaglio process is also a unique public security feature: attractive, consistent and easy to identify. As the direct measurement of 3D-structures due to the rough and challenging circulation conditions has proven to be difficult and lacking robustness, a completely different approach has been sought which exploits the unique opacity and appearance of suitable intaglio structures.

Counterfeits in machine-based authentication systems
Machine-based authentication of security documents, i.e. automatic recognition in document processing systems such as vending machines, automatic teller machines (ATM), note acceptors and similar financial transaction machines, is also affected by counterfeiting. Indeed, it is not unusual to discover rather more advanced forgeries of security documents which also replicate the machine-readable security features present on genuine documents, such as infrared and luminescent and/or magnetic markings. As a matter of fact, most machine-based authentication systems essentially focus on machine-readable features of security documents and hardly ever proceed to an actual visual inspection of the security features, printed, applied or otherwise provided. For understandable and obvious reasons central banks are reluctant to publish the characteristics of the ‘machine-readable’ features. Any other attempt to authenticate the banknotes by using the ‘overt’ features has not been successful. Therefore using the intaglio in itself would also exploit the most important overt feature platform with the machine-readable authentication.

Intrinsic features
The present approach stems from the observation that security features printed, applied or otherwise provided on security documents exhibit highly characteristic visual properties (referred to as ‘intrinsic features’ in this article). Using the specific production processes only available to the security printer, and in particular intaglio printing, generates features that can be recognized by a knowledgeable individual and by habitual and subconscious knowledge of the public.

Test results have shown that intaglio-printed features are optimally suited for the purpose of an authentication approach. This is especially due to the fact that intaglio printing enables the printing of very fine and sharply defined high-resolution patterns. Also, intaglio is the most resistant printed feature, making the methodology more robust under circulation conditions.
In terms of signal processing, the fine structures of intaglio techniques can be considered of interest for certain ranges of spatial frequencies. Therefore, a new algorithmic approach is presented here, which is especially able to detect the intaglio structures and their intrinsic characteristics.

The main concerns in the detection of banknote forgeries are that:
• many overt security features are unknown;
• if an overt feature is known, then the optical details are in most cases unknown (exact content of a specific kinegram, a watermark, etc.);
• even if known, most of the features can not be handled in daily life (for example the see through register).

Perception
In the analysis of genuine banknotes the human perception is based on haptical and visual sensation. Security features, which fit into the range of subconscious recognition and habitual knowledge, are of major importance in newly-developed and existing applications. One of the major perceptual effects is the ‘Pars pro toto function’ (PPT function), which describes the fact that humans are able to create complex information structures in the cortex without having detailed information available5. Furthermore, the PPT function causes decisions to be made based on only a few details. Applying this effect to genuine banknote checking by humans leads to the fact that:
• many security features are available, but only a few are needed;
• optically very prominent overt features with many small details that define the feature’s authenticity will occlude the genuine character of the feature itself.

• Visual neurons
The receptive field of a visual neuron is composed of a 2D-region in visual space which size, measured in degrees of the viewing angle, can range from a few minutes of arc to tens of degrees. The receptive field increases in size at successive processing stages in the visual pathway and, at each processing stage, increases with the distance from the point of fixation.

Information is usually transformed while it is processed via the sensory pathway. One typical transformation is the contrast amplification in the activity of neighbouring neurons (NN). The contrast amplification is defined via signal differences in the receptive fields of neighbouring neurons. Contrast enhancement is a general principle of information processing in the sensory pathway, including the visual and somatosensory system. One mechanism which underlies contrast enhancement is ‘lateral inhibition’, whereby neighbouring cells inhibit each other. The lateral inhibition reacts as an edge detector for contrast differences and can be described as a frequency band-pass function. This behaviour leads to an excellent perception of fine details in images (visual system) as well as fine structures on banknotes (somatosensory system), see figure 1.

It can be concluded that receptive fields, lateral inhibition and the sensory cortex result in stimulus processing systems which are able to visually and/or somatosensory detect fine structures by contrast enhancement strategies. A technical model can be described in general with the theory of the so-called Wavelet Transforms (WT, see figure 2). First concepts on RF and wavelet transforms can be found in various expert publications.8,9 Recently it was demonstrated that receptive field adapted wavelets can be successfully applied to intaglio structures of banknotes7.

Approach
One of the ‘big’ challenges is the authentication and classification of banknotes equipped with intaglio print. Intaglio print is one of the most prominent optical and tactile security features available, and it is worthwhile to analyze this type of print with multi-scale frequency methods. The general idea behind a multi-scale frequency analysis is to break up an image into different frequency scales which represent the edge steepness of the intaglio lines. The frequency components of different scales describe the slope behaviour of an intaglio line in different orientations, making intaglio printing a first line security feature which can not be assumed as just fictional.
Intaglio has a unique slope and edge behaviour which can even be detected on old and worn out banknotes. Volume production counterfeits (offset) and single counterfeits (inkjet print, etc.) can be detected with a new scale-based frequency analysis (Shift Invariant redundant Wavelet Packet Transform (SIWPT) with Best Branch Algorithm (BBA)10,11 in combination with an adaptive classification model12. Figure 3 shows a DEM 5 banknote.
The features which were used are based on second, third and fourth order frequency histogram statistics of a part of the banknote. The histograms show different characteristics based on the slope and edge steepness, and it can be assumed that the classification results are unique for different banknotes.

In a study a set of 6 textures with 150 instances each was investigated (see figure 4). One-third of the instances have been produced using an intaglio printing process and two-thirds have been printed as counterfeits by offset printing, using high-quality and medium-quality equipment. The high-quality prints were generated with all the detailed information of the printing process (plate-making, paper, etc.) and were printed by a simultaneous offset press, whereas the medium-quality prints were produced by a banknote drum scanner followed by a standard offset printing process.

In the recent feasibility study a set of 900 areas of interest of one specimen (Jules Verne of KBA-Giori S.A., Switzerland) have been investigated. The original is based on a full simultaneous offset background and on ONE CTiP intaglio features. This was analyzed with the following counterfeits:
• original Simultan and the intaglio 2D-data used for a line offset plate printed in special colours;
• screen offset (standard RIP with CMYK screen printing).

The areas of interest had a few position errors (translation and rotation) due to production tolerances. Scans in 1200 dpi represent different latitudes, greyscale transitions and contrasts. They represent the common intaglio structures in a portrait area.

All 300 instances of every texture have been decomposed by 2D-SIWPT with db2-Wavelets13 and the BBA. The db2-Wavelets are found as reasonable representatives for an RF analysis. The investigation of all 900 instances has shown that the feature extraction is independent of production tolerances such as transitions and varying contrast. Moreover, the BBA produces stable features for all investigated printing techniques regardless of texture properties such as contrast, latitude of greyscale transitions or structure.

Conclusion
In this article a link is presented between visual and somatosensory receptive fields during the authentication of a document or banknote containing intaglio printing. A new algorithmic feature extraction concept based on incomplete Shift Invariant Wavelet Packet Transform for discrimination of different printed banknote textures has been highlighted as a model for a receptive field approach. It has been demonstrated that the usage of first order statistical moments of wavelet coefficients is adequate. Since the algorithm proved to be capable of characterizing the used printing techniques for all instances of the investigated textures, the application to other security purposes seems to be possible.

Third-Party Risks to Your Business (Part 1)

What is a Fractional Information Security Officer? (Part 2)

What is a Fractional Information Security Officer? (Part 1)