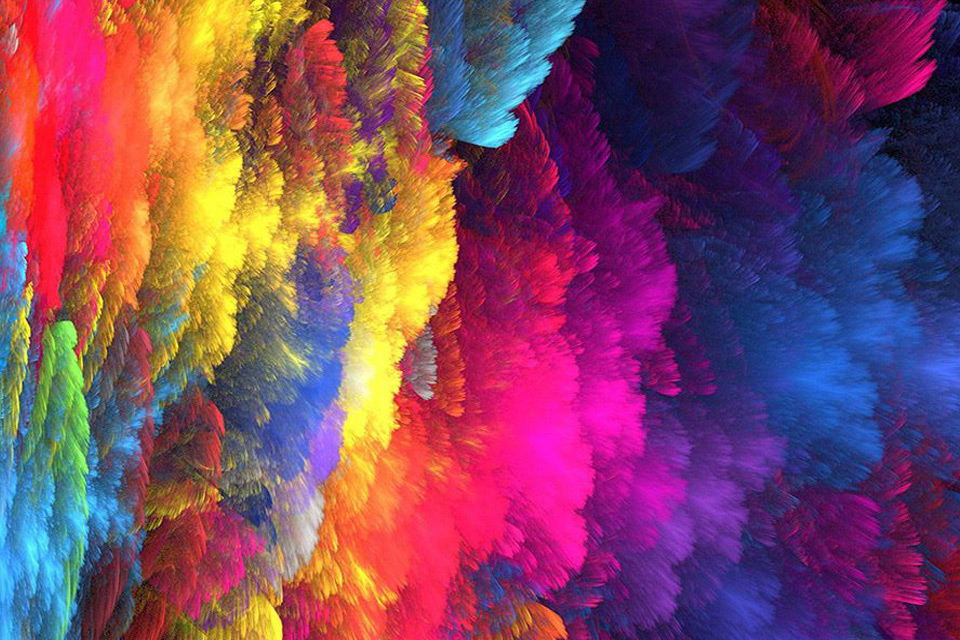 Today’s credential security technologies are largely concentrated in holographic foils, which offer the benefits of being overt and tamper-resistant. However, the low durability of these foils makes them impractical for use on documents such as ID cards and driving licenses, and the need for optimum lighting upon inspection also creates a number of vulnerabilities. One new and highly sophisticated optically variable device that addresses these drawbacks is a film technology that offers similar overt optical properties, as well as additional durability as a laminate. One already established security laminate uses a patented process to create a multicoloured, three-dimensional image security feature that appears to float above and below the surface of ID credentials and driving licenses.

The next generation of this technology offers improvements designed for the new and escalating demands of the market. As the movement towards e-Passports continues to grow and technologies in machine reading, face recognition and other automatic authentication tools become more prevalent, security films must evolve to be compatible and the necessity for high-quality and strong physical security features will remain. Strong overt security features are necessary to help authorities quickly verify the authenticity of documents at the first point of inspection. A laminate that is durable and machine readable which offers an easy to see overt feature can help government entities and other issuers of ID credentials create high-quality, highly secure documents that can be authenticated quickly.

Three-dimensional images
The floating image technology used in these laminates is related to the concept of integral imaging (figure 1), a technique first described more than 100 years ago by the French physicist Gabriel Lippman. Lippman was seeking a way to produce autostereoscopic 3D photographs, and he proposed that this could be achieved by exposing a photographic film to light gathered from a three-dimensional object through a lens array. In this way, each microlens of the lens array forms its own unique latent image of the light scattered from that object because the position of each microlens is unique with respect to the object.

Once these latent microimages are developed, an observer viewing the array of recorded microimages sees a projection of the images formed by each microlens, which the human visual system integrates into a composite image. As the viewer’s eyes each see projections of a different subset of images, the brain reconciles this apparent inconsistency as being due to the presence of a three-dimensional image. If the observer changes his or her vantage point with respect to the microlens array, the subset of projected images seen by each eye will also change, resulting in motion parallax, which the brain also recognises as a characteristic of a three-dimensional image.

This concept is well known in the optics literature and there are many companies attempting to develop three-dimensional displays based on the integral image concept. However, the technology has proven difficult to scale up, due both to the high resolution required in each microimage and to the need for a high degree of registration between the microlens array and the microimage array in order to maintain the fidelity of the composite image.

An innovation in floating images
A breakthrough was made in the three-dimensional image field when 3M developed a laser-based process for recording high-resolution microimages in materials that had an array of microlenses. Using this method, the registration of the microlens array and the microimage array is not a concern, as the two are created in alignment.

This innovation was made when a scientist attempting to use a laser to create two-dimensional images on glass-beaded license plate sheeting set up the laser system and exposed the film without having collimated the laser beam properly. This created a spot on the material that looked like it was floating. The resulting technology was patented in 2001 (see figure 2).

The laser imaging process
The process for producing three-dimensional images entails focusing the output of a laser to a point either above or below a microlens sheeting. The light from the laser source collected by each microlens in the array is focused at the back focal plane of the lens and is used to record a microimage of the laser focal point. With this process a complete image containing pixels with continuous variation in float height can be drawn by moving the laser focal point relative to the sheeting. When the laser focal point is above the plane of the lens array, the resulting image pixels appear to be located above the lens array, while laser focal point locations behind the lens array result in image pixels that appear to be located below the lens array. In this way it is possible to draw high-resolution microimages that produce composite features that both float above and sink below the substrate. In addition, the detailed nature of the microimages results in a very distinct viewing angle range, outside of which the composite images are not visible.

Glass bead substrate
Floating images made with this laser-based process have been available for the past six years in a security laminate made with a glass bead substrate. When this laminate is exposed to pulsed laser light, microimages are formed behind each glass microsphere by ablation/decomposition of a small volume of radiation-sensitive material against the film. This results in a black three-dimensional floating image on the white film background, creating a strong overt feature with dynamic movement in all directions when tilted. As the viewing angle changes, the images appear to float above or sink below the laminate surface and disappear when viewed at angles outside of the designed viewing angle for the image. The feature can be easily verified without a tool and without particular lighting conditions, making it ideal for use in the field.

Drawbacks
Although this laminate has been successfully used for many years, its properties limit its ability to be used with machine readers and face-recognition technology. This is due to the size variability of the glass beads in the substrate, which creates lenses of different focal lengths.

This small variability results in an image that, although recognisable to the human eye, is generally too fuzzy to be read by a machine. Technologies such as high-resolution bar codes and optical character recognition are therefore leading to a demand for a film that enables greater clarity.

Greater clarity
Several breakthroughs in microlens construction and colour technology have enabled the next generation of floating image security film technology. This new film, besides offering greater clarity than a glass microsphere substrate, also allows for the use of multiple colours. The substrate is created in a process called ‘microreplication’, in which a cylindrical metal tool – similar to a printing plate – is made with the inverse structure of the desired microlenses. A thin layer of curable material is applied to the substrate film and the film is then rolled against the cylinder and cured, coming away with the shape of the microlenses fixed into it.

Using this process, it is possible to exactly determine the shape of the resulting microlenses and optimise the material for its specific security application. Each lenslet is exactly the same, and each section of film is identical to any other. Distortion in the substrate no longer has to be accounted for in the design of the floating image, and the greater control enabled by this consistency gives users the ability to introduce additional security features such as microtext.

Colour in next-generation material
While the previous generation security laminate uses a radiation-sensitive material as a coating on the back of the glass bead substrate to produce a black floating image, a new technology is used to introduce colour in this next-generation material. Originally, the possibility of incorporating radiation sensitive layers of colour-shifting interference stacks was discussed; however, this process would have a negative effect on the substrate’s transparency, making it impossible to read printed material through the floating image-containing film. Instead, the next-generation material creates floating images via a newly developed proprietary process that incorporates ablative transfer of colour during the imaging process. This results in a film that is transparent except in the regions where the colour has been transferred behind the microlenses. Altogether, the product capitalises on a wide range of technologies, including films, imaging, nanotechnology, and microreplication.

Security applications
The recent development and scale-up of the microreplicated microlens technology – coupled with the laser imageable, colour-containing ribbons for the production of coloured floating images – has resulted in the availability of 3M™ Colour Floating Image Security Laminate. The use of high-quality microlenses with their focal plane in a well-defined location enables a high-transparency laminate through which the printed personal information is very clear and easy to read. The floating image is available in a customisable format that contains line art graphics that can both float above or sink below the substrate. Additional overt features of the laminate include its high transparency, matt finish, and silky surface feel, which allows for tactile verification of the document’s authenticity. 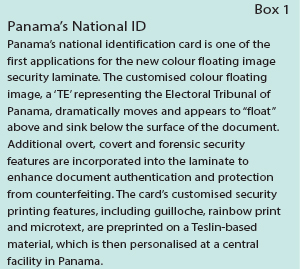 An additional covert feature that can be incorporated in the floating graphic is a kinetic microtext that is visible under 10x magnification. This combination of a covert security feature within an overt security feature adds an easily recognisable level of complexity that is very difficult to counterfeit. Furthermore, the coloured floating graphics exhibit a ‘retrochromic’ effect, in that observation of the features in ambient light is characterised by the transmitted colour of the feature, while observation in retroreflected light is characterised by the reflected colour of the feature. For example, floating graphics that appear blue in colour in ambient light will appear red in retroreflected light. These properties are easy to see and simple to explain, therefore creating a document authentication feature that is difficult to simulate, yet can be readily understood by a widely dispersed population.

Conclusion
The new laminate offers high clarity, making it more compatible with border management machine-reading technologies, and sophisticated security features that help keep users’ documents on the cutting edge. Its strong overt features and the ability to verify documents with no special tools make it easy to use at first-point inspections. It is currently being utilised in the new national identification card for Panama (see box 1). With multiple interdependent layers of overt, covert and forensic security features, the laminate enhances document authentication and protects from counterfeiting. 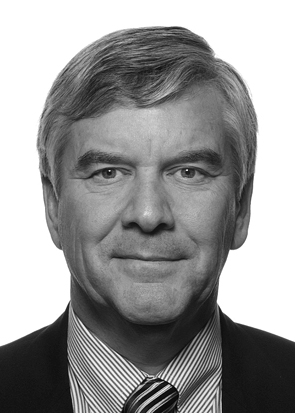 Martin Kenner is the global laboratory manager for 3M’s Security Systems Division. His work is focused on technical advancements and problem solving for the global security industry. Kenner leads 3M’s development and migration of anti-counterfeiting material products and hardware/software technologies for use in secure border management and document issuance solutions.