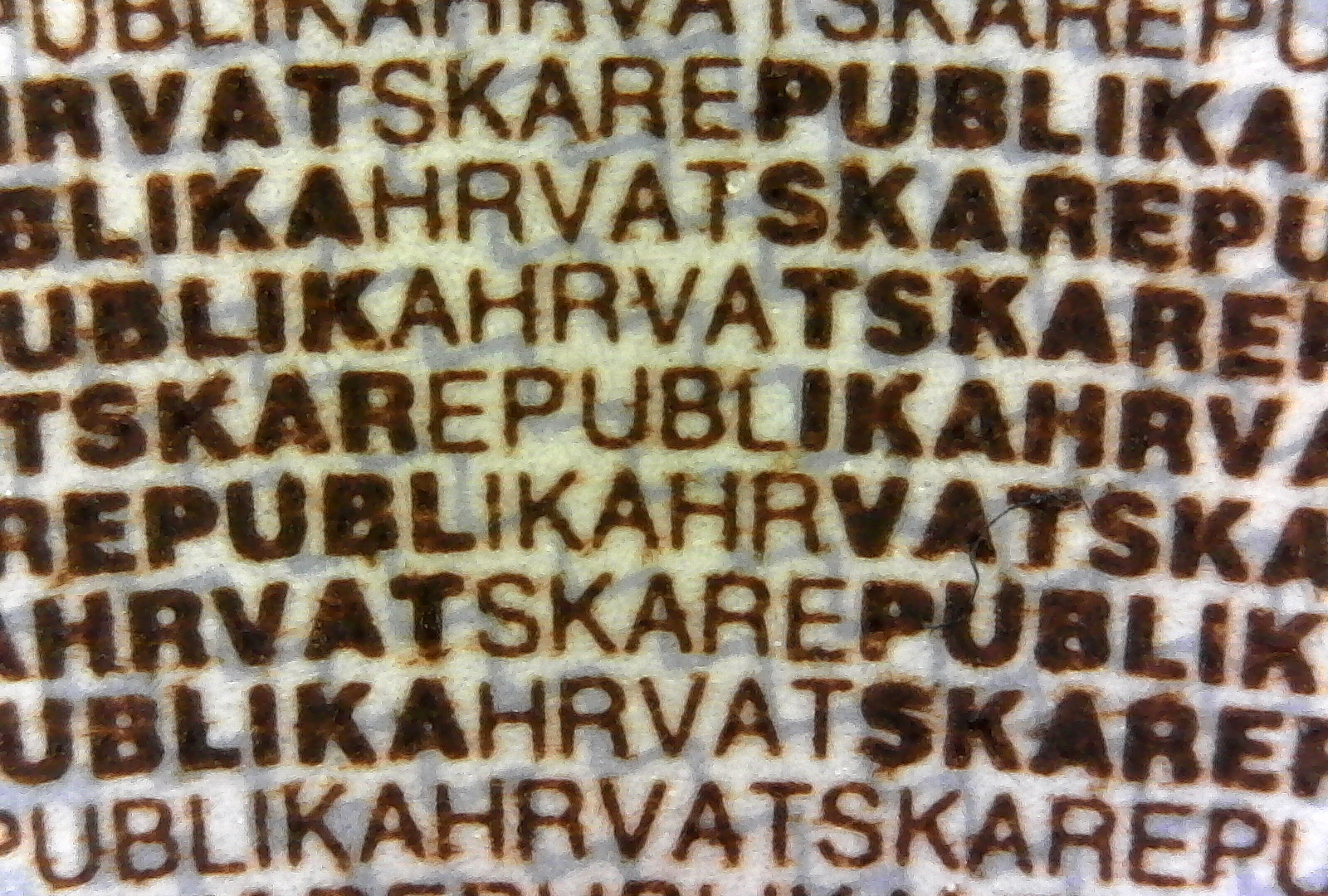 Introduction
Microprinting (also known as microtext) is among the most widely adopted document security features in use today, and like all security feature technologies can be used in ways that enhance or limit its security functionality. Some advantages of microprinting include its low cost, extreme design flexibility, versatility across printing methods, easy integration with other security features and its compatibility with a wide variety of security document types. But microprinting is also subject to some important limitations, such as a disposition to quality control problems, the necessity of magnification for inspection, the difficulty document users can experience in attempting to locate microprinting in an unfamiliar document and (in many implementations) limited effectiveness against traditional counterfeiting attacks. The question explored by this paper series is how microprinting can be optimised to exploit its advantages and/or mitigate its disadvantages. As is often the case in security printing, the answers are design and press capabilities.

To begin, this first paper describes font and artwork options for microprinting, while the second and third papers address colour gamut and microprinting placement, respectively. The strategies described are presented for informational purposes and may or may not be appropriate for specific security document applications or manufacturable by all security printers.

Throughout this paper, example microprinting graphics are displayed as pairs, with the left image captured at lower magnification (usually 10X) to show context in the document and the right image (usually 18X) to show the microprinting design in greater detail.

Tiny fonts
Microprinting was first used in security documents long before inexpensive home/office colour printing devices became readily available, but its popularity surged in the 1990s as digital counterfeiting became widespread. Essentially, microprinting was intended to exploit differences in technical capabilities between genuine document manufacturers and counterfeiters with limited graphic arts skills and access to limited digital printing techniques. Specifically, the offset and intaglio printing processes used by genuine security document manufacturers are capable of printing sharp and clear spot colour and line art text, even at font sizes too small for most individuals to read without magnification. Because tiny details are beyond the resolution limits of many inkjet and toner devices (which rely on halftones and process colour to simulate line art and spot colours) available to typical digital counterfeiters, many digital counterfeits can be identified by inspecting microprinting or other document artwork with magnification. If the microprinting is blurry and unreadable, or composed of coloured dots, the document should be regarded suspicious.

This view is considerably simplified for many reasons. Readability assessment is subjective and dependent on document user training. Microprinting can be prone to quality control problems that produce blurry microprinting even in genuine documents if production standards are not met. Sophisticated traditional counterfeiters with access to offset and/or intaglio printing technology have always been able to mimic readable microprinting and other subtle art. Further, inkjet printers continue to improve, with higher resolutions and smaller droplets. Because specifying how small text must be before a consumer printer can no longer produce a readable simulation is a constantly moving target dependent on many factors, some designers incorporate microprinting of two or more sizes as shown in Figure 1, or microprinting of dynamically changing size as shown in Figure 2, into a single design.  Smaller microprinting may be more difficult for counterfeiters to simulate but larger microprinting is easier to inspect, so use of multiple sizes in a single design may capture advantages of each and can be achieved at low cost.

For these reasons, size alone may not be adequate to measure the security value of microprinting against either digital or traditional counterfeiting. If size is not the only appropriate criteria, microprinting should be revisited to identify what other metrics exist (for example, microprinting artwork, colour and placement) and how those can be optimised alongside size.

Microprinting colour and placement are relevant topics to be addressed in later papers but are out of scope here. The following sections explore how both fonts and macro microprinting patterns can be designed to combat traditional counterfeiting in addition to digital counterfeiting.

Font design
Artwork origination by genuine designers and artwork replication by traditional counterfeiters are two different processes. Genuine designers build a design from scratch on a blank canvas, but counterfeiters must work backwards from an existing design. Security document artwork that resists traditional counterfeiting does not necessarily have to be hard for genuine document designers to originate but should be difficult for a counterfeiter to replicate. This topic is complex and cannot be discussed comprehensively here, but many strategies commonly used for other types of security document artwork can also be extended to microprinting designs. Two pertinent points might include use of 1) proprietary instead of public artwork and 2) nonrepeating patterns that cannot be easily counterfeited using step-and-repeat processes.

Regarding the first point above, in the microprinting context “proprietary artwork” could mean design of a distinctive proprietary font instead of a publicly available font. A proprietary font cannot be easily counterfeited just by selecting the exact font from a software dropdown menu and typing vector text, and can force traditional counterfeiters to either replicate microprinting artwork by manual redrawing (as would be necessary anyway for non-microprinting line art designs) or substitute a non-proprietary font for the proprietary font and accept a greater risk of detection. Alternately, even a public font can be customised by making it bold as in Figures 3 and 4, or italicised as in Figure 5, changing the kerning between characters as in Figure 6 or leading between lines as in Figure 7, changing the baseline between adjacent characters as in Figure 8 or use of any of the many other software techniques that can be applied to vector artwork fonts. Hypothetical examples could be envisioned that use all these techniques simultaneously in a single microprinting design; for example, incorporating multi-size variable bold and variable italic characters in lines with varying leading and kerning, and so forth.

The examples in Figures 3 through 8 are composed largely of repeated microprinting artwork, so traditional counterfeiters need only replicate a small portion of the design and then apply step-and-repeat techniques to scale the small area up to a larger pattern. Returning to the second point above, the most effective security designs incorporate continually changing patterns that cannot be counterfeited using step-and-repeat techniques. In the context of microprinting, one way to create a “non-repeating pattern” is by modifying each character in a unique way, such as by changing the shape of characters between lines of different font size so that one line of replicated text cannot simply be copied and enlarged (or reduced) to generate the others, as in Figure 9. Similarly, changing the position of bold characters within lines of otherwise identical repeating text makes each line a little different from the others, prevents easy step-and-repeat counterfeiting processes, and nominally increases the time and effort required to counterfeit the design, as in Figure 10. Justification of lines affects the spacing between characters and can be combined with changes to character width, such that character width can be related to the number of characters in the line, as shown in Figure 11.

Figures 9 through 11 illustrate some ways font-level microprinting customisation can prevent traditional counterfeiters from using step-and-repeat techniques. These font-level techniques may be the main type of customisation possible for certain implementations of microprinting, such as single lines of microprinting in bearer signature lines of identity or travel documents. But strategies that can be applied to an entire multiline microprinting pattern, like baseline curvature or distortion, offer effects that are hard to replicate using font vector artwork techniques on individual characters.

Curvature and distortion
The font-level customisation of individual characters described in the prior sections can be differentiated from customisation of larger artwork patterns because the two design methods require traditional counterfeiters to perform different kinds of artwork replication. Specifically, genuine document art that is either designed by hand to be non-repeating or which is converted from repeating artwork into non-repeating line art (for example, a security halftone) can force traditional counterfeiters to work harder. This is also true of microprinting. In the prior examples showing font-level customisation (Figures 1 through 11), the microprinting consists mainly of rows of parallel lines, some of which contain repeated artwork that can be simulated at least in part using step-and-repeat processes. The next examples of artwork-level customisation are different because application of curvature and/or distortion affects characters differently depending on their location in a larger multiline microprinting pattern, which further prevents traditional counterfeiters from using step-and-repeat.

First, macro artwork patterns such as baseline curvature can be modified without also applying font-level customisation. For example, in Figures 12 and 13 each microprinted line is curved in a slightly different way than other lines, but apart from being rotated and placed on asymmetrically-curved baselines, characters from one part of the design look much like characters from other areas. A traditional counterfeiter might be able to replicate a single instance of each character and then copy and paste into multiple positions, but the rotation of each character or the curve of each different baseline would have to be replicated as well, so step-and-repeat would be difficult for entire lines.

Variable baseline curvature can also be combined with font-level customisations, such as bolding of text in certain areas as in Figure 14. For improved resistance to step-and-repeat counterfeiting, distortion to the font can be applied as a function of baseline curvature as illustrated in Figure 15, or a wave pattern like Figure 16, or any of a multitude of other patterns, one example of which is shown in Figure 17. In each case the distortion affects each character in the microprinting pattern slightly differently depending on its placement, resulting in a diversity of warped character shapes that forces traditional counterfeiters to treat every character as a unique element since characters cannot be repeated from one part of the artwork to another.

The general purpose of this strategy is to convert repeating text to non-repeating line art, but this could be done in many ways. For example, multiple font-level customisations could be combined with artwork-level customisations in ways not illustrated specifically in these examples. Taking a random hypothetical extreme case for purposes of illustration, consider a microprinting design containing various levels of bold and italicised characters in a custom font that is also distorted at a macro level. Such a microprinting design could still be assessed for readability but would be complicated for a traditional counterfeiter to redraw without knowledge of the specific steps the genuine designer followed to originate the design.

Disclaimer: This paper represents the opinions of its authors and not necessarily the opinions of the US government. The technologies and strategies described may not be available, appropriate or manufacturable for all document issuers. The examples shown do not imply anything about the quality of a document, its designer, its manufacturer, or the issuing authority. For informational purposes only.

Outsmart Those Who Threaten Your Smart Home

Dangers That Threaten Your Smart Home