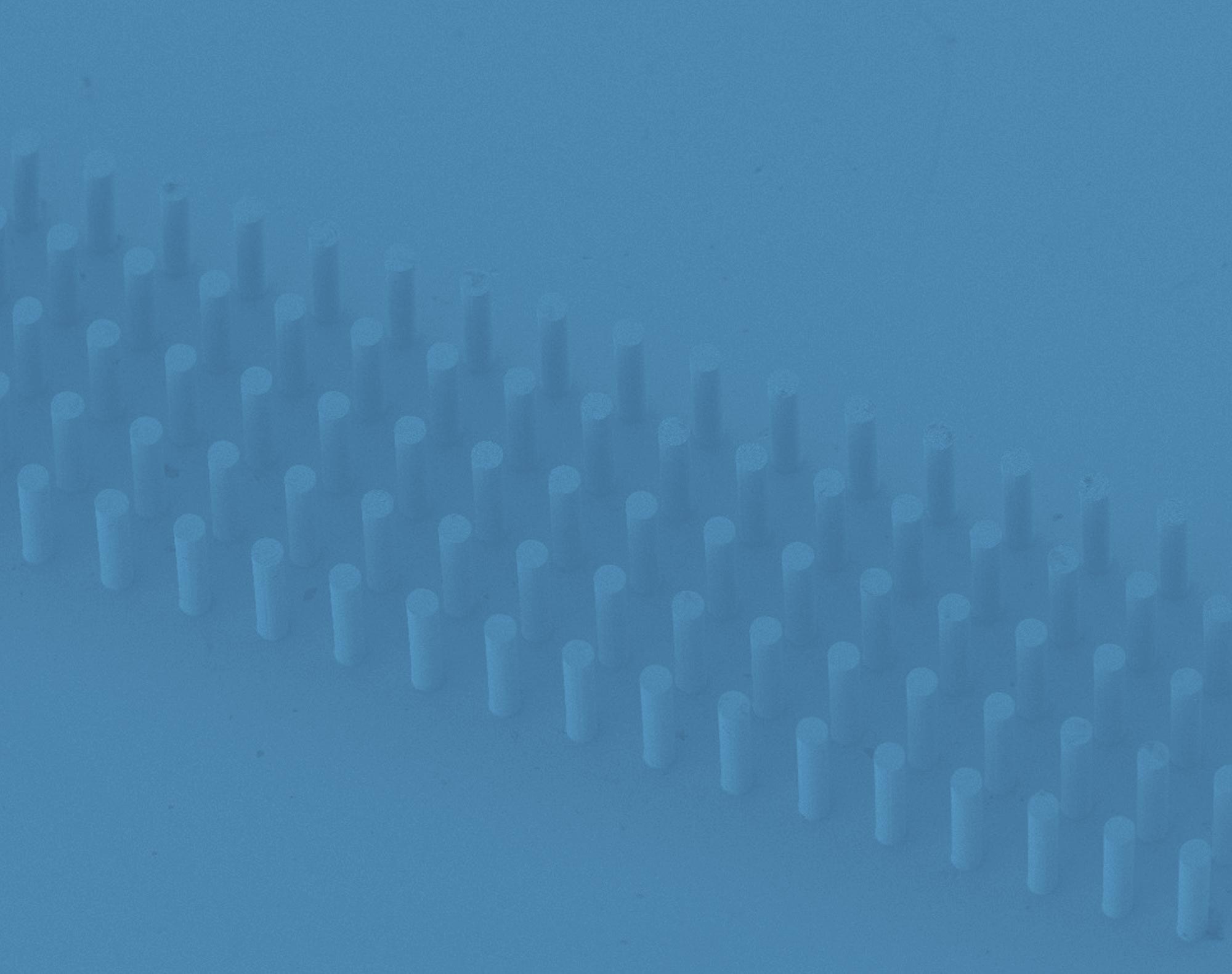 In 2006 an overt banknote security feature, called MOTION™ was introduced. This feature, which incorporates micro-optics technology, has subsequently been approved for use in about 40 banknote denominations. Due both to its success in the banknote application and its technical attributes, interest has developed in the use of MOTION™ products in ID applications, and new forms are currently under development.

Six years ago, Crane’s Currency Division introduced a new micro-optic technology security device to the banknote industry. MOTION™, which up until now has been used almost exclusively in the form of a window thread, creates synthetic images through the principles of moiré magnification. The feature incorporates a micro-optic structure which includes three optical components: a micro-lens array (see box 1), an optical spacer and an image array. Figure 1 shows a cross-section of the structure used in banknotes today. 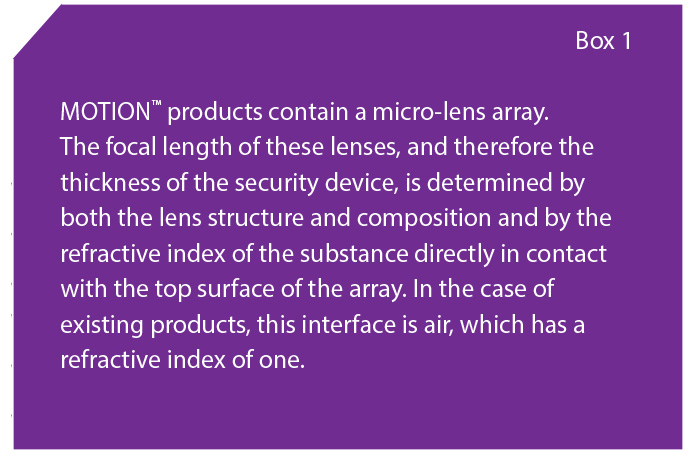 Development programme for ID applications
MOTION™ combines good counterfeit resistance with optical effects that are simple and easy for the public to use in authentication. In addition, its high-contrast images are viewable over a wide range of angles under most lighting conditions. Due to demand for these features in other secure government-issued documents, a programme was launched in 2010 to investigate and develop appropriate product forms for ID applications.
Possible product forms are:
– laminates for paper passports and visas;
– laminates for polymer ID documents, such as ID cards and driving licences;
– inlays for incorporation within polymer ID documents, such as polycarbonate passport data pages, national ID cards and driving licences.

These new micro-optic product forms are currently under development and will be introduced commercially from the second half of 2012.

– The area of coverage by the security feature
When applied over banknotes in the form of a window thread, MOTION™ covers less than 3% of the surface area. When used as a laminate for ID applications, it can cover nearly 100% of the surface, resulting in a visually striking impact.

– Resistance to tampering
Although tamper-resistance is an important consideration in banknote security features, it is of even greater importance in ID applications. Substantial joint work with early adopter partners has been undertaken to develop strong bonds between MOTION™ and the substrate in the various applications. In addition, an ultrathin construction, designed for extreme tampering resistance, is under development and will be introduced into applications where other ultrathin laminates are popular.

– Product life
As a security feature, MOTION™ is a multilayer product. Therefore, the bond strength between the layers needs to be strong enough to provide for a long life (up to 10 years). Bond strengths, as measured by pull strength are ten to twenty times greater for the ID forms of MOTION™ than for the forms used in banknotes.

The development of so-called sealed MOTION™ is of substantial importance in ID applications. Sealing the lenses beneath a layer of an appropriate polymer allows MOTION™ security inlays to be placed within other polymers, such as polycarbonate. The sealing layer also protects the lenses from abrasion, thereby providing for enhanced laminate life.
– composition of the substrate;
– compatibility of the substrate and the feature;
– environment.

New product structures for ID
The considerations above demonstrate that new product forms and designs are required to serve the identification markets. New forms designed specifically for use as laminates over paper and polymer documents and for features incorporated within polymer documents have been developed. Significant improvements have been made in the mechanical strength, abrasion resistance and compatibility of MOTION™ products with ID substrates. The new structures are in various stages of manufacturing scale-up and commercialisation. New designs which take advantage of the optical effects of micro-optics, but, when appropriate, temper the visual impact of the technology, have also been developed. A short summary of selected new product forms is listed here.

Laminates for paper documents
For paper ID documents, three main product forms have been developed:
1. a form similar to the conventional MOTION™ structure used in banknote applications, but modestly thicker, at approximately 35 microns thick;
2. a second version of this form, which incorporates a new composition with a breathable optical spacer;
3. a very thin version (6-10 microns thick).
Figure 2 shows cross-sections of these materials.

Laminates for polymer documents
For use as laminates over ID documents with a polymer composition, such as PET or PVC, a range of products have been developed which incorporate an entirely new ‘sealed’ lens structure. This structure protects the lenses from abrasion and soiling and allows for products ranging from about 25 microns thick up to substantially thicker materials. Figure 3 shows cross-sections of a portion of the range of product thicknesses available for sealed MOTION™ products.

The unique material properties of polycarbonate provide for inseparable fusing of layers of the material. Due to this property a different micro-optic structure is under evaluation for use as laminates over polycarbonate.

Inlays for incorporation in the matrix of polymer documents
Sealed MOTION™ products have also been developed for incorporation within polymer document structures, such as polycarbonate structures. The sealed structure is ideal for this because the sealing process ‘locks in’ the focal length of the lens structure. As a result, replacing air with polycarbonate as the interface with the lens structure does not change the focal length of the product. Sealed MOTION™ for polycarbonate is a little different than the sealed MOTION™ laminates in that the thinnest form is always used and the sealing compound is an appropriate adhesive. This is shown in figure 4.

Summary and Conclusion
In the six year years since MOTION™ was introduced to the banknote industry, its authentication and security attributes have been universally recognised. Due to demand for these features in other secure government-issued documents, a programme was launched to investigate and develop appropriate product forms for ID applications in 2010. 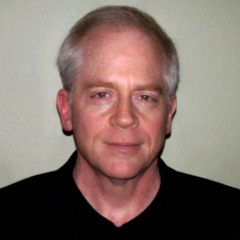 Scott Palm is President of Crane Micro-Optic Solutions, the micro-optic technology branch of Crane Currency. Scott has 30 years of business experience with industrial and security companies in the areas of general management, corporate development and research and new product development and commercialisation. His education includes a Master of Business Administration degree from the University of Chicago and an undergraduate degree in engineering.