The Lupo specimen banknote was created in 2015 by an international collaborative project including five leading companies (Jura, Landqart, KURZ, Gleitsmann Security Inks and Komori) with common goals: to produce a very high-quality sample banknote providing the best of their talent and their cutting-edge technology, and also to exercise and demonstrate their ability to successfully cooperate with each other, for the first time in this way. The project was completed in a very short time, it took less than five months, and successfully ended with the satisfaction of all participants.

Idea and substrate
During a friendly coffee break conversation at the African Banknote Conference in Cape Town, at the end of 2014, representatives from Landqart came up with the idea of jointly creating a bank note with Komori and Jura based on their Durasafe® substrate. They wanted to use an image of a wolf in the design. In the mountains where they are based, they occasionally see wolves, which are considered a symbol of the surrounding wild nature.

Their colleagues at Komori and Jura liked the idea. Landqart already had the multilayer substrate with a crystal-clear transparent window, known as ThroughSafe™. The window can contain an image and have any shape possible. Here, the window had the shape of the full moon on one side of the substrate (in one layer), and the shape of a wolf’s head in the middle on the other side (in another layer). The printed image inside the transparent head is a subsequent design suggestion from Jura. It represents another wolf on a cliff, so when the note is held to the light, the howling wolf is perfectly silhouetted in front of the moon.

The other window on the banknote is a one-sided, semi-transparent ViewSafe™ window which plays the role of a special, double watermark picturing different wolves. The substrate itself, considered one of the most innovative available today, consists of two outer layers of 35 g/m2 banknote paper which are fused together with a 35 g/m2 layer of polymer, creating a material that can’t be delaminated. This material has several advantages. Not only is it compatible with all traditional printing techniques, but watermarks can be applied too. Other security features such as threads can also be incorporated between the two layers, either fully embedded, to be viewed in transmission, or behind a window. All this provides unparalleled security and also gives the designer plenty of scope for creativity. So, it’s not surprising that Jura liked the idea and immediately started discussing it.
The design process of the Lupo specimen started in January 2015. Inspired by the design possibilities mentioned above, Jura was able to complete the first version of the design within a few days. Shortly after, two further companies were invited: KURZ and Gleitsmann Security Inks (GSI).

Concept design
Jura developed a complete security pre-press system of the highest quality, including software and hardware solutions for banknote printers, from the first sketches to the print-ready printing plates. All elements of this system were used during the Lupo project, including concept design creation, security design elaboration for intaglio and offset, image engraving, proofing, and platemaking with quality control. The full pre-press design was completed using Jura’s new generation Corvina security design software suite.

First, the concept design was created based on various initial suggestions from the specialists at the Jura Design Studio. They voted on the best elements to be included and combined them into a common idea. For the front Jura decided on the unusual idea of a majestic lone wolf, resting calmly in the forest (to be printed with intaglio), and created a design of a pack of three running or hunting wolves for the back. The denomi­nation in text and numbers was placed on both sides, and the names and logos of the contributors placed on the reverse. They created five variations, each featuring a different one of the companies involved in the top right hand corner.

The chosen background elements – for offset printing –
were trees, leaves and other special multicoloured patterns. Jura also incorporated the elements from the substrate (the full moon and the wolf’s head) into the design, and then created the howling wolf on a cliff as mentioned above.

This concept design was finished using special software tools, while taking into consideration the number of printing plates, the interplay of colours, the density of the design, and other important factors. This made it easier to minimise the difference between the accepted visualisation and the final realisation of the banknote. In this way the suitable concept design accelerated the workflow and reduced the usual problems of the elaboration.

Both sides of the note were composed of six offset (three wet and three dry) and one five‑colour intaglio workings. The concept design was filled in with graphic security features for offset and intaglio, including com­plex and unique scalable vector- and high-resolution pixel-based elements. The ‘portrait’ of the main wolf was digitally engraved in vector format using freehand tools on a graphics tablet. Afterwards, all final elements were combined on a screen and stored in a single file.

Subsequently, the security colourisation was simulated on the screen using virtual printing plates. All offset designs (except the one on the back) were printed in rainbow colours. The intaglio parts were also printed in multiple colours on both sides, using Orlov masking. The final look of this very complex design was accurately displayed, including the non-printing elements, such as the holographic foil. The software tools were used for interactive colour selection and positioning and the various colour versions were created on a high-quality digital proofer to be able to choose the best combi­nation. Finally, the result was given to GSI and Komori with exact colour values and splits for production.

Then the whole intaglio working was extended with 3D data, such as parameters for line depths and profiles, and the result was processed with Jura’s DLE® (Direct Laser Engraving) machine. The single original plates created were used for intaglio hand proofs, or for the previously mentioned digital proofs.

After the results were considered satisfactory, the step-and-repeat process (5×8, 40 set) for the digital design was carried out. The full wet and dry offset plates were produced using high-resolution CTP machines (Jura JSP Super Secuplate UHR TS and Jura JSP Super SecuDry II UHR), and the print-ready intaglio printing plates were laser engraved using DLE.®
After having been checked at every stage of the workflow, the offset and intaglio plates also went through Jura’s final plate quality control system before being handed to production. The complete design and all printing plates were created in Hungary.

Holographic foil
KURZ contributed to the project by selecting a security hotstamping foil stripe with a non-registered KINEGRAM.ZERO.ZERO® – one of their most successful developments – and applying it to the surface of the substrate. It represents a series of wolves’ heads and the denomination numbers ‘105’, reflecting the existing overall design. The diffractive structures were indi­vidually engineered for the specific visual effects and optimised for their brilliance and brightness. Using this kind of foil gives designers absolute freedom in terms of the geometry of shapes for metallised areas. Now, it can also be used in the substrate as a trans­missive feature, as an alternative to a classic embedded security thread, posing a very tough challenge to counterfeiters.

Inks
All the security inks for the offset and intaglio printing were supplied by GSI. They provided a unique product which is a series of inks called airGSI. These inks feature IR absorption that can be detected with an IR camera or a single frequency transmitter of IR light. The security level is further enhanced by making this possible at not only one, but at two separate wave­lengths. A single ink provides both IR visible and invisible measurement readings.
The worldwide popularity of automated cash trans­actions has increased the importance of machine readability. These security inks are very suitable for banknote authentication that relies on sorting and verification equipment.
Other variations of these inks have light and colourful shades, and they can also be combined with different pigments. For example, fluorescent pigments which emit yellow, green, red or blue light under a UV light source (usually with 366 and/or 254 nm wavelength), or other special, so-called up-converting pigments featuring overfrequency, which radiate visible light in different colours when stimulated by an invisible IR laser. These unconventionally combined inks can significantly increase the security of a banknote.

Printing
The banknote was printed on Komori’s security printing equipment in Japan. The background designs contain 12 different inks in total. Both sides were printed using three wet offset and three dry offset plates, applying more rainbow colourisations, with an LC-32 sheet fed offset machine. Then the intaglio elements were printed with five additional inks on both sides, applying the Orlov method, using the IC-532III intaglio press.
The printing quality is very high, achieving precise registration and beautiful multicolour effects on the offset part while the intaglio working is sharp and tactile everywhere, featuring thin and distinct lines. The front image of the wolf and the microtext line at the top of the reverse are extraordinary, despite it being the first attempt of intaglio printing on this substrate.
Komori’s quality control also involved an automated monitoring system to control the registration on the press and high-resolution cameras to inspect both sides of the printed sheets – which helped accelerate the overall workflow.

Varnishing
After printing, the banknotes were varnished in Europe to extend the life of the inks. This is unusual for pro­motional banknotes as they will not enter circulation. However, as the team wanted to test the durability of the special materials, inks and substrate of the Lupo specimen, they decided to have all areas except the transparent and semi-transparent windows varnished.

Presentation
Soon after completion, the banknotes were unveiled at the Currency Conference in Vancouver, in May 2015, but they were first officially presented by Landqart and Komori at the Watermark Conference in Sochi, in September 2015. Since then, the companies involved have been promoting the Lupo specimen and its story worldwide and have received many positive comments from the industry.

Summary
The Lupo project was a very valuable experience for the five companies that took part. It was an honour to work together and they all gained new professional knowledge from each other. This kind of collaborative approach is getting increasingly common today, as producing modern banknotes involves balancing functional, practical and aesthetic demands. This is a challenging job and the specialists with the right level of expertise and eye for detail often come from different companies. The rapid development of new technology poses new challenges in terms of counterfeiting, and trust and collaboration within the security printing industry are more important than ever when it comes to producing new, more secure documents. The Lupo project has proven that collaboration is certainly possible, but also that clear and open communication and joint efforts lead to outstanding, truly beautiful and – more importantly – functional results. 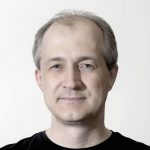 Ákos Janca joined Jura in 1995, where he started in the Design and Support divisions as a graphic designer, product tester, security printing software specialist, demonstrator and trainer. For the last ten years, Ákos has been working as a Product Specialist, participating also in press and mar­keting communication. His key responsibilities are: conducting special training courses, maintaining website content, and writing product user manuals, technical specifications, brochures, magazine articles and newsletters.