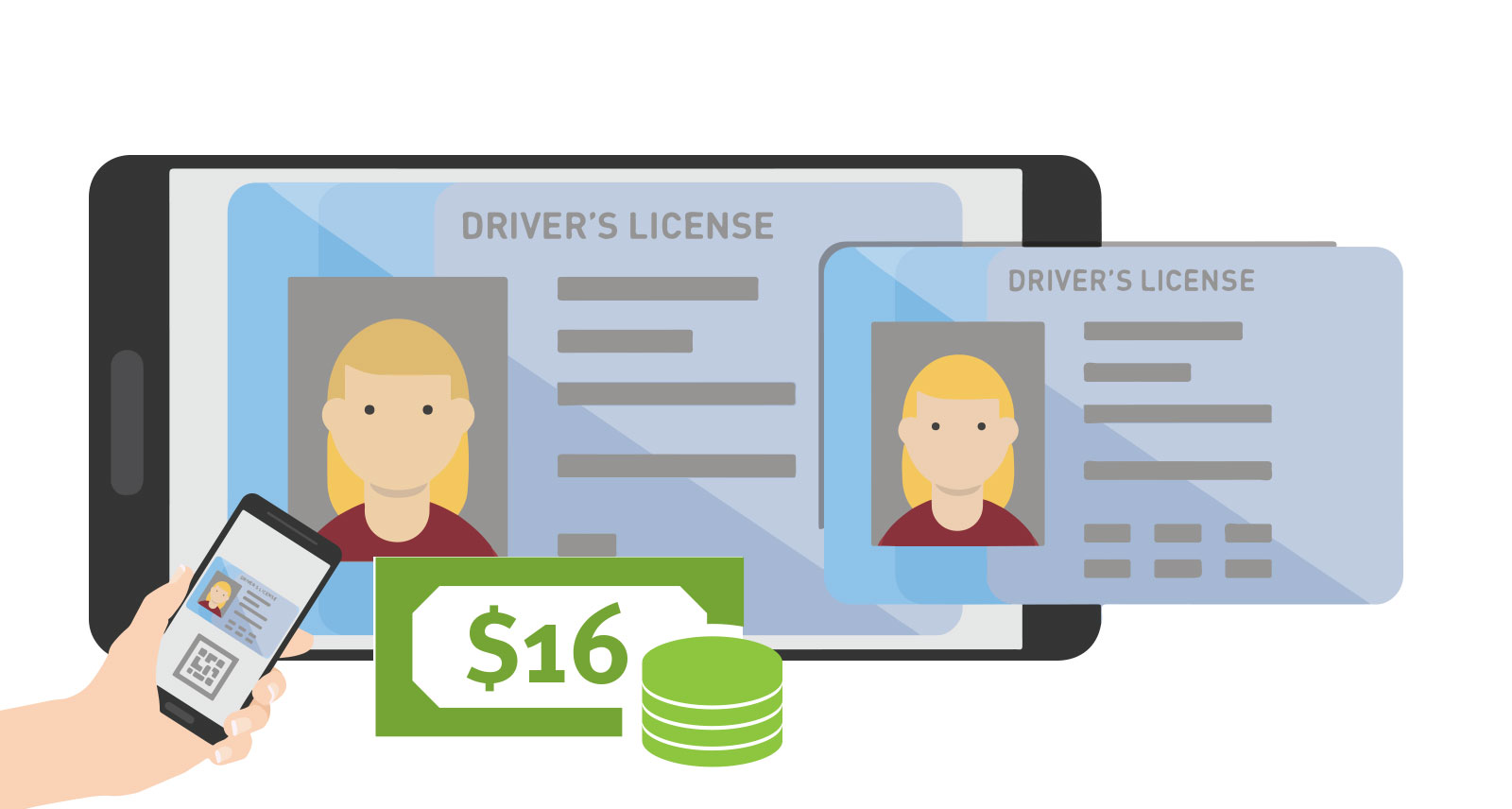 During the last two years, studies have been launched in several US states to explore the technical feasibility of a digital driver’s license (DDL). In the second half of 2017, extensive pilots were conducted in several US states, the results of which Eric Billiaert shares in this article. He also gives an overview of the different DDL initiatives in the US and around the world, and will show why a DDL is far less susceptible to fraud than a typical physical driver’s license.

In the US, besides conferring the right to drive a vehicle, a driver’s license (DL) has become the standard photo ID, used to confirm someone’s age and identity. As the world is evolving rapidly towards mobile and digital formats for many everyday tasks, during the last two years studies were launched in several US states to explore the technical feasibility of a digital driver’s license. In August 2016, Gemalto received a two-year grant from the US National Institute of Standards and Technology (NIST) to pilot the development of a smartphone-based credential in the states of Idaho, Colorado, Maryland and Washington D.C. In 2017, Wyoming decided to join the pilot.

The digital or mobile driver’s license (DDL) is a secure version of a physical DL stored on a smartphone in the form of an app. The DDL is set to retain the key visual aspects of a physical DL, displaying the driver’s personal information: name, address and date of birth, along with their photo.

It will be used as a companion to supplement existing licensing and identification documents. It has been designed to be as user-friendly as possible (see Figure 1), while allowing for a comprehensive and secure ecosystem that grants users access to a variety of services and solutions.

Figure 1: How to get a DDL on your mobile phone.

In the United States, the four states of Colorado, Idaho, Maryland, Washington D.C. and now Wyoming are piloting the concept of a digital driver’s license (DDL). The goal is to create and implement a solution that taps into the ubiquity and large-scale adoption of the smartphone to deliver a secure identity verification tool, with multiple applications and use cases.

Figure 2: The scenarios in which the DDL was tested.

• updates to the document while in the field

The researchers also found that many use cases  for the DDL presented themselves throughout the trial that nobody had originally considered.

Phase 2 commenced in December 2017, and focuses on extending the use case application, and on ‘attribute sharing’ with third party providers.

The first phase of the pilot ran for one year.[1] Uptake was anticipated to be primarily embraced by the millennial driver, but the results were surprising. The demographic most interested in the program and reaping the inherent rewards was not the millennial generation, but rather Generation X, aged 45 to 54. This age group showed 95% interest in using the DDL, while the millennials showed 86% interest – the average of all age groups.

The situations in which participants were most likely to use the DDL were varied and interesting: 71% for airports and travel, 62% for hotel reservations, 44% for purchasing alcohol, 43% for age-restricted venues and 41% for the doctor or the pharmacy.

The majority of participants perceived value in having a DDL, and over half the participants said they would be willing to spend an average amount of USD 16 to obtain one. This willingness is consistent across age, gender and tech adoption groups.

The first phase of the DDL pilot underscored the multiple benefits to the individual, such as identify yourself online, sign documents electronically, rent cars, book airline tickets and organize driving services. 86% of users would still carry a physical DL with their DDL. This reinforces the concept of using both credential forms in tandem based on the given scenario and user preference.

The overall experience of participants in Phase 1 was overwhelmingly positive (see Figure 3).

9 in 10 participants indicated they felt confident using the DDL to verify age, while 4 in 5 liked not having to hand over a physical DL. The general public agreed, as feedback from a random sampling of the general popu­lation was also gathered after arts festival passers-by, DMV patrons and baseball game attendees were invited to experience a DDL demo first-hand. After participating in those demo events, more than 98% of users had positive impressions of the convenience of a DDL, an improved opinion of the technology, a stronger desire to use a DDL in the future, and the inclination to use a DDL again in a similar situation.

Currently, as the project moves toward the second phase, it is looking to integrate with additional services. There are also plans to explore the use of the DDL in payments and digital wallets to make them faster and even more secure.

Standards in the making

The pilot states are working with key organizations to ensure that global and national standardisation and specifications are in place, alongside functional requirements and guidelines. These organisations include:

Early December 2017, results from the first phase of pilot activity were shared with the ISO technical committee in a meeting in Vienna, Austria. Data minimization and privacy protection were hot topics covered in session discussions. What happens next will depend on the successes within Phase 2, but so far the responses have been overwhelmingly positive and the potential is huge.

Several legislatures (legislative body of States in the United States) have authorized the study of smartphone driver’s license apps, such as Arizona, Illinois, Utah and Texas to name a few. Some other states have legislation under consideration. Idaho, Colorado, Maryland, Washington D.C and Wyoming are now on their way and have set pilots funded by a federal grant. Historically, Iowa was the first state to decide to test a digital driver’s license in 2014. The Iowa Department of Transportation hopes to make the app public in 2018.

Kentucky, California and New Jersey are considering the topic as well, but feasibility studies have not yet been launched.

In the 2015-2018 period different initiatives related to DDL were initiated around the world. There are in fact striking similarities to what many countries are defining and implementing, including digital identity as a defining feature in a digital space of trust, with good levels of security, interoperability and data protection.

What makes a DDL secure?

A digital driver’s license provides the highest level of security in credential storage, data transmission, and verification. A DDL is far less susceptible to fraud than a typical physical DL or ID. It is protected by high-tech security features and strong authentication not available on plastics. On the smartphone, the digital credential is protected by additional layers of security, such as a PIN or fingerprint. And what happens if the smartphone is lost or stolen? The digital license can be remotely deactivated or wiped from the smartphone almost instantly, giving the user the added peace of mind in knowing that their information is safe from misuse.

The verification device, which can be a smartphone, tablet or a simple barcode or QR code scanner, runs software that can read the presented barcode and run a real-time check. No footprint is left on the verification device and no geolocation tagging or tracking of user information occurs. In a nutshell the benefits are:

These initiatives and pilots of digital driver’s licenses and the services they could initiate have striking similarities in challenges and potential benefits with what is called a ‘trusted identity’ in many other countries. There, States are including ‘digital identity’ as a defining feature in a digital space of trust, with good levels of security, interoperability and data protection. They are all seeking, after all, to boost efficiency, economic development and inclusion with the ultimate aim of better serving their citizens in a reliable, secure and transparent way.

1 Digital driver’s licenses: What can we learn from the first multi-state DDL Pilot? https://www.gemalto.com/brochures-site/download-site/Documents/gov-noram-infographic-ddl-links.pdf [accessed 28 March 2018].

Eric Billaert has held the position of Marketing Communications Director for the Government Business Unit at Gemalto since 2006. He joined the smart card industry through Schlumberger in 2000. From 1985 to 1999, he held various technical, business development and marketing positions at Hewlett-Packard, Digital Equipment Corporation Europe and Bull International. Eric, a French national, holds an MBA from the EDHEC Business School in Lille and graduated from IHEDN, the Institute of Higher National Defense Studies in Paris.