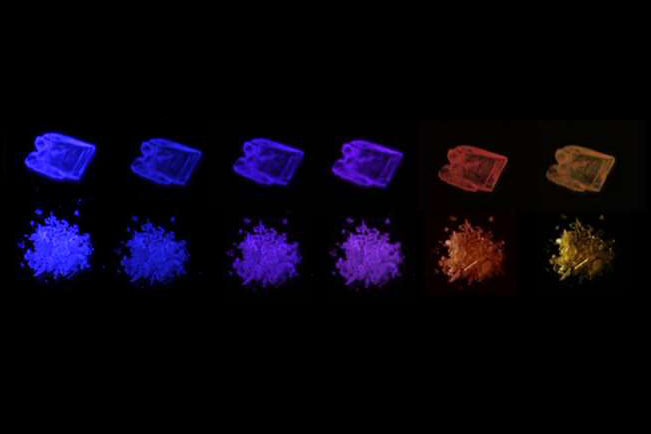 A team of chemists in China has discovered a single compound that has a colour-modified afterglow.

According to Chemistry World, this technique could protect banknotes better against counterfeiting.

A crystal that glows blue but changes colour within a second to purple and then orange.

To currently get a similar affect researchers have to build materials out of different phosphorescent molecules.

The molecule in question is 4,4′-bis (N-carbazolyl) -1,1′-biphenyl (CBP), a symmetrical, linear aromatic.

Under ultraviolet light, it is light blue in colour.

But after turning off the UV light, it glows blue, changes to purple and then orange before it fades.

The latter is a property of the individual molecules, the former comes from the aggregation interaction between molecules in the crystal.

If crystal is ground to an amorphous powder, or the compound is dissolved in a solvent, the afterglow disappears.

Together with a diphenylanthracene derivative, CBP can provide better and safer anti-counterfeiting marks on banknotes. Under UV light, one set of symbols is visible while the anthracene disrupts the fluorescence of CBP.

When the UV light is switched off, the anthracene becomes inactive and the afterglow of CBP shows a different, colour-changing set of symbols.