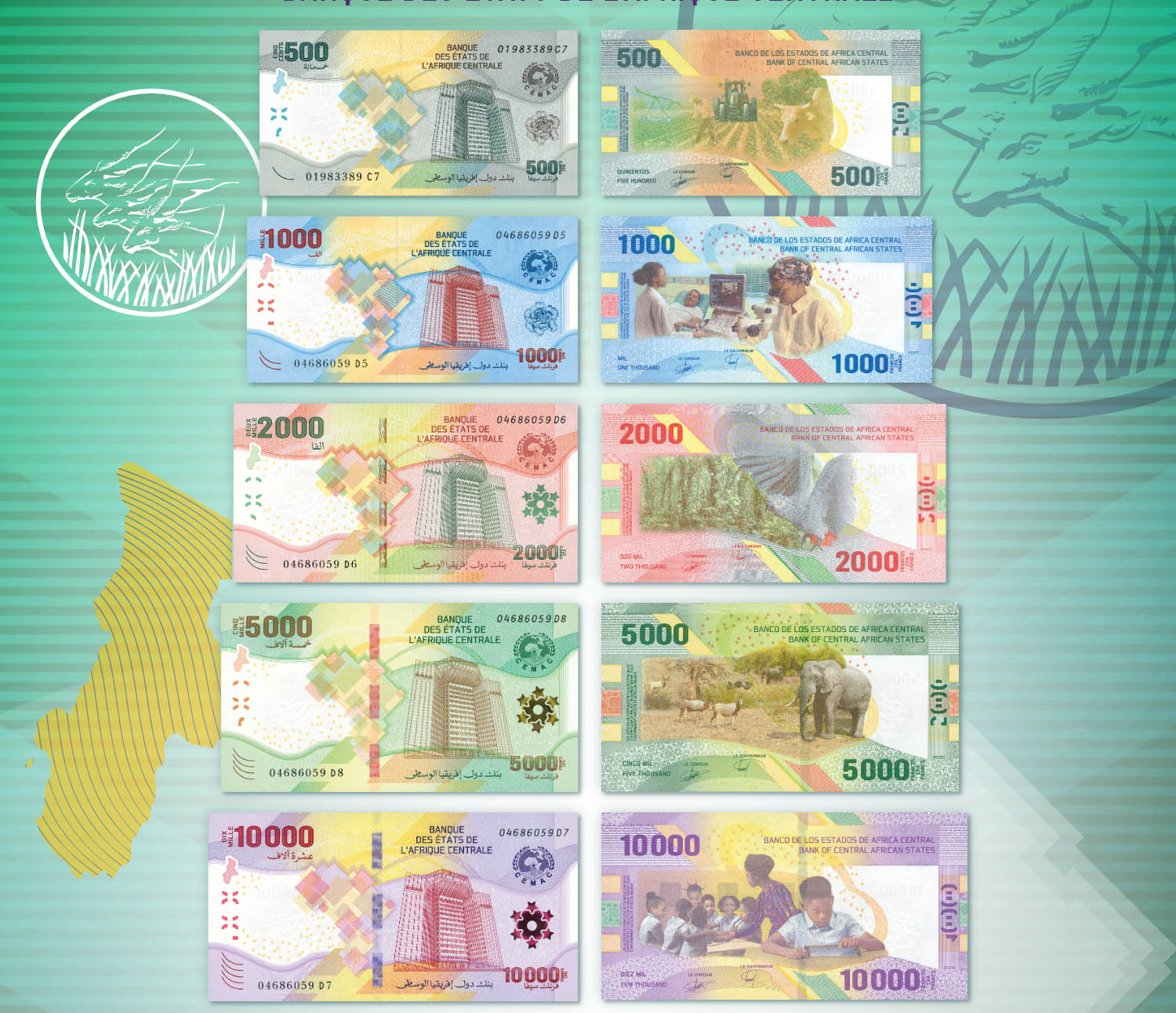 For the first time, the notes will represent all four official languages spoken in the BEAC region: French and Arabic (on the front sides), English and Spanish (on the reverse sides).

A drawing of the BEAC headquarters building in Yaoundé, Cameroon appears on the face of all five denominations, but each note has a different colour scheme, as illustrated below:

Also present on the face of all five banknotes are a map; the denomination as see-through register; a stylized outline of Africa in diamonds; and the Central African Economic and Monetary Community (CEMAC) logo.

A closer look at the redesigned notes

Each of the new banknotes has a unique colour scheme, a specific theme reflecting the region, and updated security features. 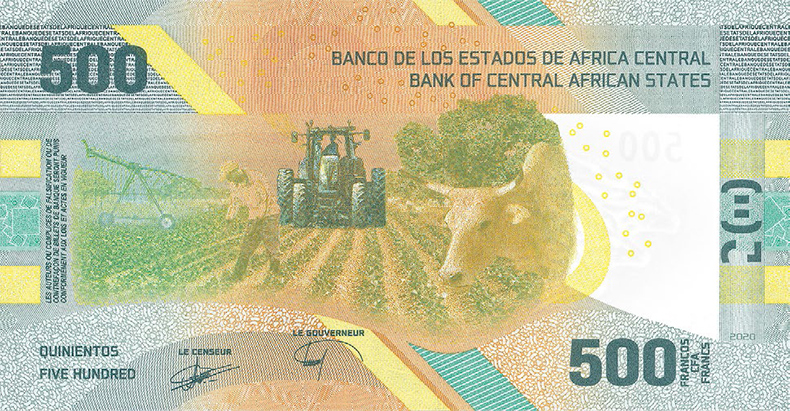 The primary colours are gray, yellow, blue, green, and orange. The central theme of this note is modern agriculture. Security features include a solid security thread with CEMAC, a watermark (three eland antelope heads), and electrotype 500. 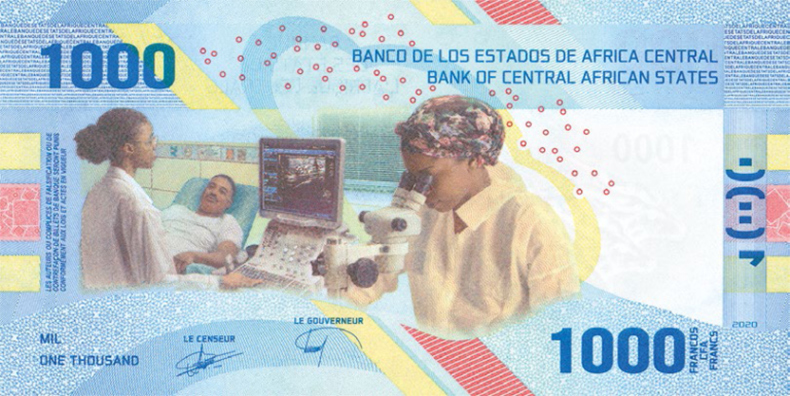 The main colours are blue, yellow, red, green, and brown. The main theme of this note is health care. 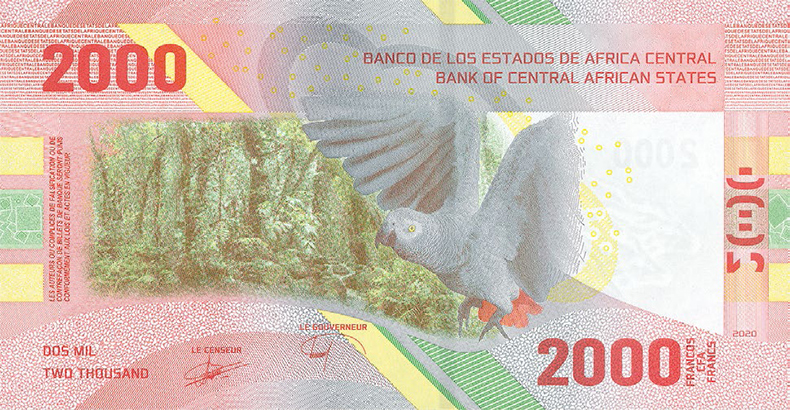 Red, yellow, green, and gray are the main colours in this note. The theme of this note is environmental protection and fauna. Security features include Silkscreen OVI® green-to-blue stars, a Dualtrack™ color-changing windowed security thread with demetalized BEAC 2000, a watermark (three eland antelope heads), and electrotype 2000. 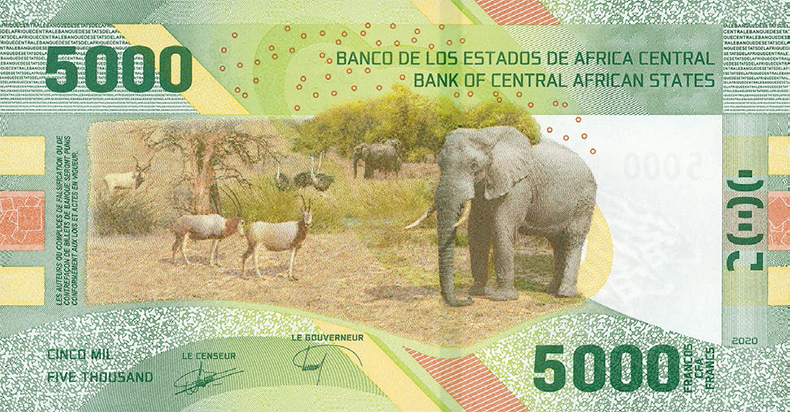 The colour scheme here is green, yellow, red, brown, and gray. The primary theme on the back side is environmental protection and fauna. Security features include SPARK Live® gold-to-green with Truspin® effect stars; a RAPID® windowed security thread with BEAC 5000; a watermark (three eland antelope heads); and electrotype 5000. 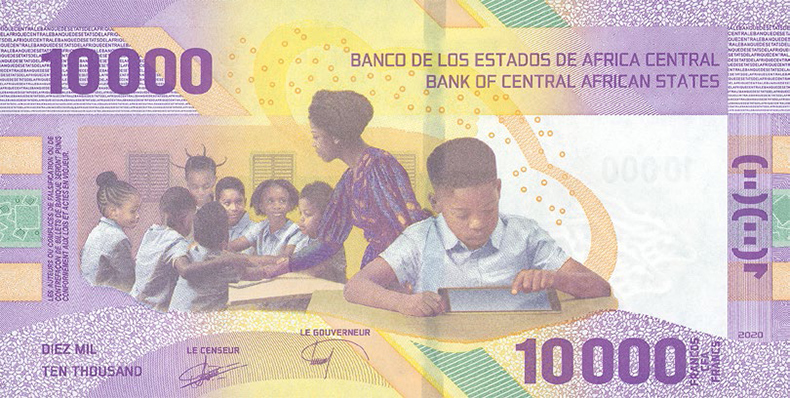 Purple, yellow, red, green, and orange are the main colours. The main theme on the back side is education. Security features include SPARK Live® magenta-to-green with Truspin® effect stars, a RAPID® windowed security thread with BEAC 10000, a watermark (three eland antelope heads), and electrotype 10000.

New material for the highest-use banknotes

The new XAF 500 and XAF 1,000 notes are printed on EverFit,® a cotton-based and printed banknote that is laminated with a protective layer to extend the lifecycle of these high-use notes.

What will become of the older banknotes?

The 2002 series of BEAC banknotes will be gradually withdrawn from circulation as they are returned to BEAC counters starting January 2024. Until then, they will continue to be valid legal tender.

The original 1992 series notes will be redeemable at BEAC counters only until 1 June 2024. After this date, these notes will no longer be eligible for exchange and will not be legal tender.