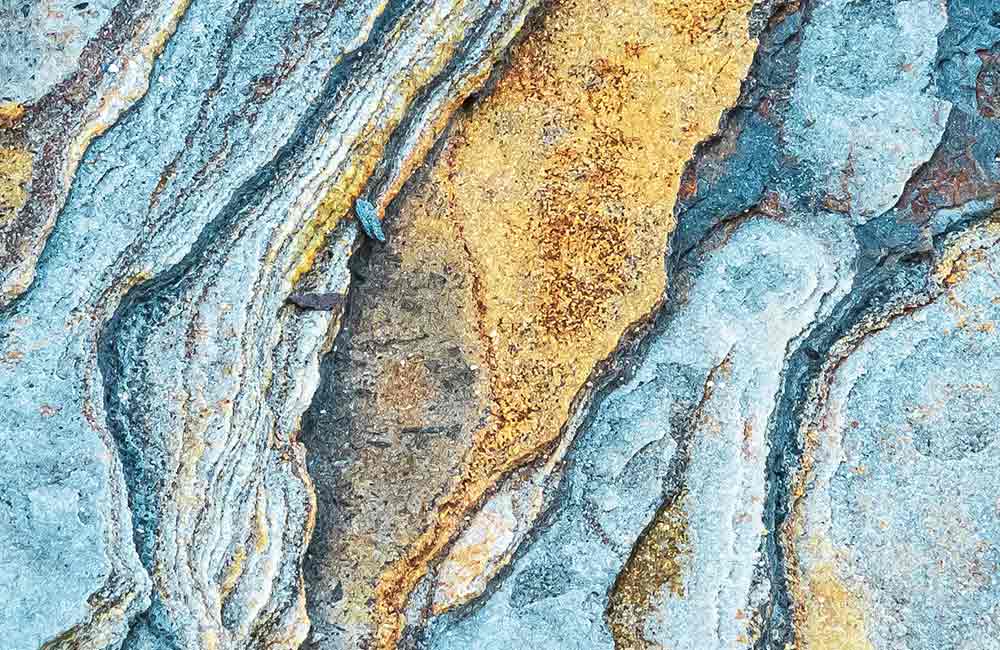 Composite substrates that contain paper and polymer layers with the same thickness as traditional security paper are novel options for security documents, and unique configurations of such substrates are expected to make an effective contribution to authenticity inspections. However, as no rational non-destructive structure inspection techniques for composite substrates have yet been reported, Takaharu Kobayashi and Tsuyoshi Uematsu propose a new internal structure inspection method based on optical coherence tomography (OCT) as a non-contact, non-destructive imaging approach that enables the observation of substrate cross-sections. This article reports on the evaluation results using OCT systems as a composite substrate authentication technique.

Composite substrates consist of paper and polymer layers, and help to prolong the life of documents thanks to their mechanical strength and durability, especially in terms of water resistance and strength against tearing. There are two main structures for such substrates. In one, both surfaces of the paper are covered with a thin polymer film to improve mechanical strength and resistance to soiling. In the other, a polymer layer is inserted between two thin sheets of paper to maintain printability while improving mechanical strength. Similar structures are used for laminated paper, waterproof paper and other such materials.
These types of substrates are developed in line with market demand, and most authorities issuing security documents around the world seek to extend the circulation life of their output to reduce printing and recycling costs. Long-life paper and polymer substrates are currently adopted to prolong the life of such documents, but there is still room for further improvement with these materials in terms of durability, printability and cost-effectiveness. Composite substrates have been developed for use with security documents based on suggestions of new solutions for these authorities.

Conventional inspection methods
Inspection methods involving observation of the internal structure of volume media such as paper or polymer substrates can be either destructive or non-destructive. Destructive inspections enable highly reliable and precise inspection of a substrate’s internal structures because they allow direct observation. However, they are not suitable for daily inspection because they involve damaging the substrate. Even non-destructive inspection techniques based on X-ray CT, ultrasonic diagnosis or confocal microscopy have disadvantages and limitations, such as the need for bulky equipment in X-ray CT, low resolution in ultrasonic diagnosis, and the time-consuming nature of observation using confocal microscopy. Thus, there is no established technique for inspecting substrate internal structures simply and easily. 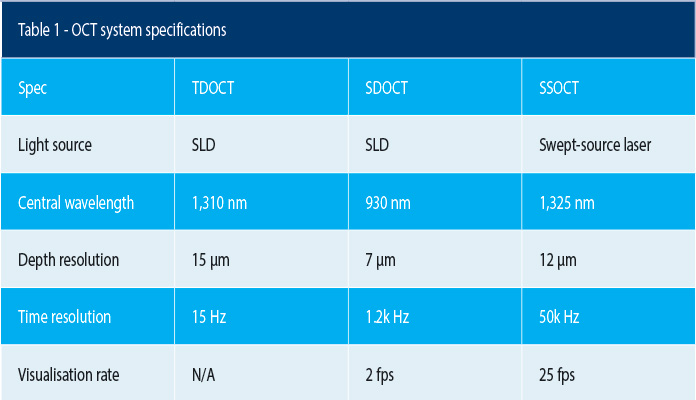 Optical coherence tomography
The authors propose optical coherence tomography (OCT) as a simple non-destructive inspection method for composite substrates. OCT is a technique for observing the inside of solid objects based on low-coherence interferometry. The method was developed at the beginning of the 1990s1, and has been used in areas of clinical medicine, especially in ophthalmology. Its use in relation to the circulatory system and dermatology has also progressed because it is suitable for clarifying the tomography of living organisms.

As OCT involves the use of the infrared spectrum for inspection, it can be leveraged to observe sample internal structures in a non-contact, non-destructive way without preprocessing. In addition, current OCT systems have favourable axial resolution with micrometre measurement accuracy and a sufficiently short measuring time to enable video rate imaging. To date, the approach has been used for cross-section observation of planes and paper containing inserted threads as well as for the evaluation of paper surface lustre.2,3
Accordingly, three commercially available OCT systems and two samples were used to evaluate the feasibility of inspecting the cross-sectional structure of composite substrates for cutting-edge security documents. These systems are:
• Time-domain OCT (TDOCT).
• Spectral-domain OCT (SDOCT).
• Swept-source OCT (SSOCT).

Technical aspects
This section outlines the technical aspects of the three OCT systems, and table 1 shows the system specifications. The light sources of OCT systems are SLD (superluminescent diodes) and swept-source lasers, which have bandwidths of 50 nm to 100 nm. Depth resolution is in inverse proportion to the central wavelength of the light source, and OCT systems with short wavelengths are superior to other systems in this regard. Time resolution is the system’s measurement frequency per second, with favourable values contributing to the performance of real-time inspection. The visualisation rate represents the number of images obtained by each system per second, and is proportional to time resolution.

TDOCT is the simplest and most cost-effective set-up used in this evaluation (see figure 1). However, its time resolution is the lowest because it depends on the reciprocation time of a mechanically driven reference mirror. In this study, the system improved by Shiina was used4. As the name suggests, SDOCT determines depth direction information from the optical spectral domain included in reflected light (see figure 2). It is more complex and costly than TDOCT, because it involves the use of a spectrometer in the photo detector. However, the system offers high mechanical stability because there are no moving parts.

SSOCT uses a frequency-swept laser as the light source, which enables sweeping of a wide wavelength range at very high speeds (see figure 3). The time resolution depends on the frequency sweep time of the light source. SDOCT and SSOCT are sometimes referred to as Fourier domain OCT because Fourier transformation is used in both approaches for the signal translation process.

Results
Results with the TDOCT system
The results obtained with the TDOCT system show the three-layer structure of Sample A, which consisted of a front paper layer, a polymer layer and back paper layer (see figure 5a). The height of the output peaks shows a gradual decrease due to the loss of light strength caused by reflection at the previous layer and by the random structure. Conversely, only two peaks are observed at the measurement point for Sample B (see figure 5b). These indicate a boundary presence just under the surface. Considering the limitations of the equipment as well as the thicknesses of the ink primer layer and the polymer film layer, the second peak can be considered to approximately represent the depth of the boundary between the base paper layer and the polymer film layer. In addition, no boundaries near the back surface were detected with Sample B, possibly because the reflection of each layer and the random structure impeded the progress of light.

Results with the SDOCT system
Observation with the SDOCT system did not elucidate the three-layer structure of Sample A, but did highlight the convex shape created by the intaglio printing on the sample surface, and also showed the polymer layer exposed to the sample surface (see figure 6a). Meanwhile, observation with SDOCT produced a precise image of the integument of Sample B, which consisted of an ink primer layer, a polymer film layer and a paper layer sequentially from the top (see figure 6b). With SDOCT, it was possible to visualise the part just under the surface but not the rear-side structure of Sample B.

Results with the SSOCT system
Observation with the SSOCT system elucidated the three-layer structure consisting of a front paper layer, a polymer layer and a rear paper layer sequentially from the top (see figure 7a). However, no boundaries near the back surface were detected in this observation. Conversely, no clear structure was observed from Sample B, which appears as a discontinuous structure in the image, possibly due to system resolution limitations (see figure 7b). In addition, the rear structure of Sample B could not be visualised with SSOCT.

Conclusion
In this study, the use of OCT systems as an authentication technique for security documents containing composite substrates was evaluated. Although current OCT systems allow observation of composite-substrate internal structures, inspectors must select appropriate system specifications for the purpose at hand because observations are affected by the wavelength of the light source and the scattering power of the sample. The use of OCT systems is expected to become even more widespread in the inspection of composite substrates because they enable non-destructive, non-contact and rapid authentication. 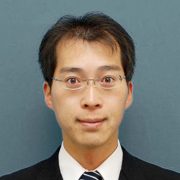 Takaharu Kobayashi graduated from Chiba University in 2004, completing a graduate program with a major in Image Science, and in 2005 he joined the National Printing Bureau, Japan. He relocated to the Bureau's Research Institute in 2009, after gaining quality control experience in the banknote printing plant. As a research fellow, he is developing and investigating anti-counterfeit technologies.