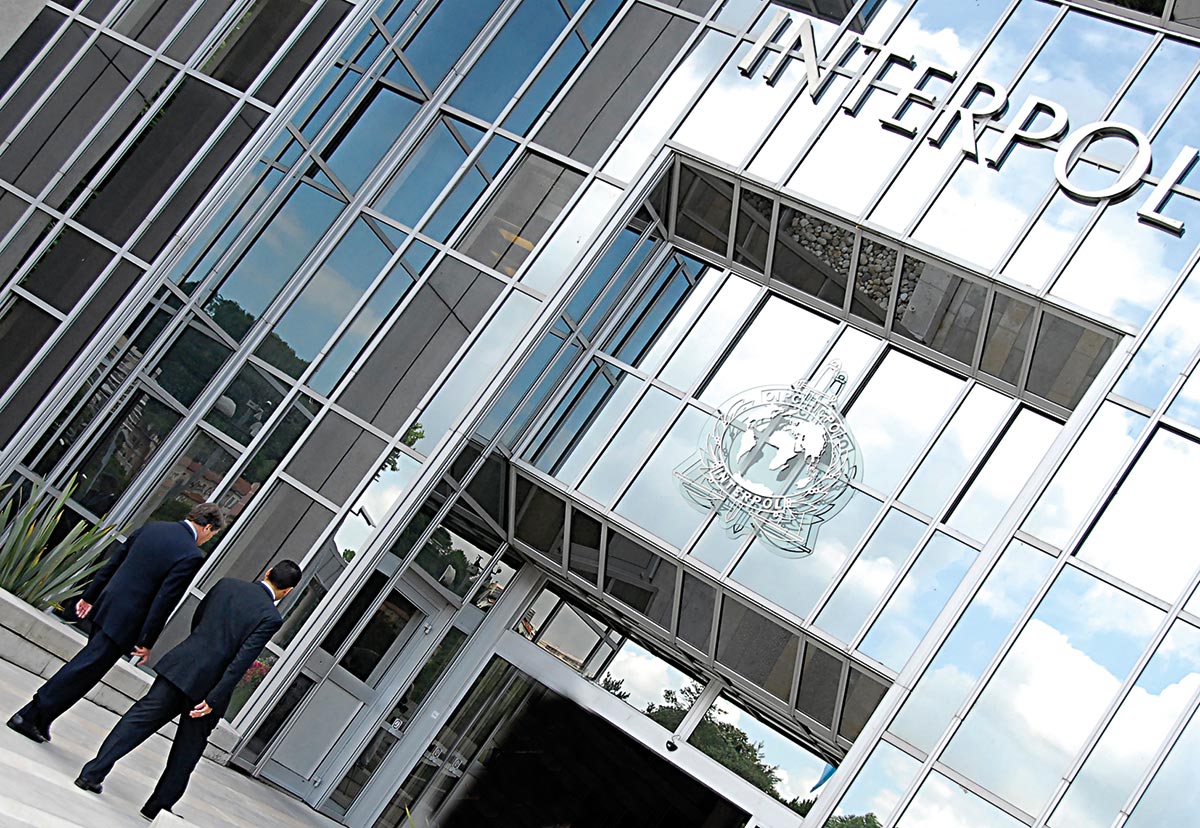 The foundation of INTERPOL
The International Criminal Police Organization, more commonly known as INTERPOL, is an organization that many people have heard of but few can actually claim to understand. Its representation in films has often led to notions of secret agents chasing criminals around the world. People can rarely tell you why or when the organization was founded, or what its official mandate is.

• to ensure and promote the widest possible mutual assistance between all criminal police authorities within the limits of the laws existing in the different countries;
• to establish and develop all institutions likely to contribute effectively to the prevention and suppression of ordinary law crimes.

INTERPOL’s General Secretariat headquarters are today based in Lyon, France, with the same core tenet of the organisation since its inception.

INTERPOL today
As an organisation, INTERPOL has had to continually evolve to remain effective against crime, which is a constantly changing phenomenon now increasingly operating across borders. INTERPOL’s priority crime areas, which each require daily law enforcement cooperation, include:

New initiatives and tools
In response to this change in criminal activity, INTERPOL has developed a variety of new initiatives and tools to assist national police forces to react even more quickly to transnational crime, disasters and other serious events. One initiative to assist police forces to respond more quickly is MIND/FIND (Mobile/Fixed INTERPOL Network Database). This database enables frontline officers to instantly access several of INTERPOL’s key global databases, including the Stolen and Lost Travel Documents (SLTD – see box) database, and to establish if an individual is attempting to enter the country on a fraudulent document.

Response to crises
These initiatives, in addition to others, such as the creation of INTERPOL’s 24-hour Command and Co-ordination Centre, have enabled INTERPOL to better support its member countries tackle criminal activity. However, border-crossing procedures for INTERPOL officials still considerably impede the organisation’s ability to provide rapid on-site support in the wake of a terrorist attack or natural disaster.
It is essential that INTERPOL Incident Response Teams (IRTs), first established in 2002, are able to respond as quickly as possible to disasters and incidents, such as the Asian tsunami in 2004 or the Kampala suicide bombings of July 2010, and arrive on the field with minimal impediments to their mission (figure 1). In the aftermath of major crises such as these, delays caused by legitimate yet time-consuming visa requirements could indirectly result in key leads to international investigations being lost or compromised, and potentially to lives being endangered.

Similarly, when their assistance is requested by member countries, INTERPOL Major Event Support Teams (IMESTs) must often cross borders as part of their deployment to major public events. This was the case recently with the 2010 FIFA World Cup in South Africa (figure 2). Related administrative procedures, however, can often complicate a team’s deployment and its ability to fulfil its duties.

INTERPOL travel document solutions
In today’s world, criminals are often able to swiftly cross borders. Therefore, the quicker law enforcement can mobilise its response to answer a country’s call for assistance, whether to combat serious crime or in response to disasters or major events, the safer that country, its region, or indeed the entire world will be.

It is to respond to these needs that in March 2009 the INTERPOL Executive Committee approved the proposal to create a special INTERPOL travel document, a decision which was subsequently endorsed by the 79th session of the INTERPOL General Assembly held in Qatar, in November 2010. These decisions will ensure that member countries can benefit from support and assistance without delay, whenever and wherever needed.

The INTERPOL travel document takes two forms: the e-Passport booklet (figure 3) and the e-ID card (figure 4). Both were developed in partnership with the Ukrainian-based EDAPS Consortium, specialised in developing and manufacturing highly secure ID’s, and Entrust Inc., a US specialist in identity-based security and border control solutions. The EDAPS Consortium has provided travel documents containing high-level visible security features which are electronically secured by Entrust’s state-of-the-art certification software ‘virtually binding’ the document to its holder. Providing the most advanced and secure identification for future visa-facilitated travel by law enforcement officials, the travel documents will set the international standard due to sophisticated visible security features combined with high-end software enhancements.

Features
The travel documents implement the latest standards for electronic Machine Readable Travel Documents (e-MRTD) described by ICAO Document 9303 Part 1 and Part 2 for passive authentication. Furthermore, enhanced biometric identification and security is achieved by employing techniques prescribed by the European Union in the Technical Guideline TR-03110 Advanced Security Mechanisms for Machine Readable Travel Documents – Extended Access Control (EAC). Compliance with these technology standards, together with anticipated formal agreements between INTERPOL and its member countries, will ensure interoperability of the travel documents and allow border control authorities to leverage the existing international PKI-based trust infrastructures to electronically validate the document as well as establish the binding of the document to the holder at point of inspection.

The INTERPOL e-Passport is a 34-page, fully machine-readable booklet containing a polycarbonate biographical data page. A high-capacity, contactless integrated circuit allows the document to meet ICAO and ISO standards. It includes an embedded cryptoprocessor with memory for storing the personal and biometric data of the authorised holder. The state-of-the-art e-ID Card also has an embedded high-capacity contactless integrated circuit, in compliance with ICAO requirements and ISO standards, and containing the holder’s biometric data and a duplicate of the MRZ data. The biometric data stored includes a high-resolution image of the holder’s fingerprints and a photograph identical to the one printed on the front of the card.
Both the e-Passport and the e-ID Card utilise high-level visible security features provided by the EDAPS Consortium and secure certification software supplied by Entrust. These security features include variable line design, microprinting, watermarks, image perforation, optically variable ink (OVI) and optically variable devices (OVD).

In addition, to facilitate interoperability with all countries for the secure validation of their documents at border control points around the globe, INTERPOL supports a state-of-the-art ICAO-compliant e-MRTD digital signing capability as well as the means to project authorisation for countries to validate the veracity of the documents as well as to interrogate and validate biometrics of the document holder.

Encryption tool
Whilst the e-Passport Booklet is purely a travel document, the e-ID Card is also an advanced authentication and encryption tool. The X.509 certificate and keys contained on the card allows the holder to authenticate to INTERPOL networks and applications as well as encrypt files and digitally sign information in an extremely secure manner via a card reader. This system is used by high level institutions around the world, including police forces and governments; and while the technology itself is complex, the holder can initiate encryption with a simple click of a button. In addition to this secure form of log-on, the back of the e-ID Card contains an IdentityGuard GRID, a second-factor authentication solution from Entrust. This technology takes the form of a table of information, unique to each card, which facilitates a random challenge adding an extra level of security when accessing sensitive information over the web. When logging on, the holder of the e-ID Card must provide requested information from the GRID in addition to their traditional username and password. Successful log-on therefore necessitates not only the knowledge of the correct username and password but also physical access to the IdentityGuard GRID on the e-ID Card.

Recognition of the travel documents
INTERPOL is currently seeking official recognition of its travel documents from its 188 member countries, following the resolution adopted by the INTERPOL General Assembly in Doha, Qatar. Countries recognising the INTERPOL travel documents are asked to grant a special visa status to authorised holders of the travel document when presented in conjunction with a valid national passport at border-controls. Countries can decide what form the special visa status may take: a visa exemption, an expedited visa-issuance, or a similar special visa treatment to be determined by each country that enables the holder to travel without impediment, when carrying out official duties on INTERPOL-related matters.

To date, nine countries – Brazil, Cameroon, Democratic Republic of Congo, Egypt, Pakistan, Senegal, Seychelles, Singapore and Swaziland – have officially recognised the INTERPOL travel document, with a further 30 countries working towards recognition. INTERPOL‘s dedicated Travel Document team continues to promote the travel document amongst its member countries to obtain further recognition and allow INTERPOL to fulfil the core tenet of the project: A Rapid Response for a Safer World.

Conclusion
For INTERPOL, the world’s largest international police organisation, the successful completion of the travel document project will enable international law enforcement officials to work more efficiently with each other and allow INTERPOL to fully carry out its original mandate of ensuring and promoting international police cooperation. National borders, whilst legitimate and essential to territorial sovereignty, should no longer act as a barrier that criminals can manipulate to evade the police.

By granting the INTERPOL travel document special visa status, member countries will ensure that law enforcement officials will be able to react as quickly as possible to calls for assistance in combating international crime or in response to natural disasters and major events. When travelling on INTERPOL-related matters, they will no longer have to delay their response to fulfil visa requirements and administrative procedures. Countries seeking assistance will receive it immediately, whenever and wherever it is needed. The INTERPOL travel document initiative therefore represents a revolutionary step in international law enforcement cooperation and in ensuring greater security assistance to citizens worldwide.

Ralph Markert has been an officer with Germany’s Bundeskriminalamt for more than 20 years and joined INTERPOL in 2006 as a seconded Criminal Intelligence Officer in the Trafficking in Human Beings Sub-Directorate. As a project manager he was responsible for the international implementation of INTERPOL databases at borders. He has since been appointed Assistant Director of the Strategic Planning Directorate and charged with overseeing the implementation of INTERPOL’s Travel Document initiative.