In this article, banknote designer Tom Badley gives an overview of the current design trends, encompassing design methodologies, best practices and new technology, and addresses designing with polymer substrates and the future of banknote design.

‘Decus et Tutamen’ could equally apply to banknotes. The evolution of banknotes’ visual communication has been propelled by the need to safeguard their value, preserving the integrity of money. No aspect of design is arbitrary – almost every artistic decision is based on the need to satisfy security criteria, and every aesthetic choice veils an aspect of security.
Moreover, as the need for greater security has increased, the graphics of banknotes have become bolder, more vivid, more experimental, and more com­plex. This makes the banknote a curious outlier in the field of design; in an age where visual communication has become pared-down in order to boldly stand out in a cluttered and dizzying advertising environment, the banknote has grown ever more ornate and meticulous – not out of fashion, but out of necessity.

Cultural icons
It is often said that “banknotes are like a country’s business card”.[1] They showcase the quintessential aspects of a culture – its landmarks, traditions, and language – and present these aspects in such a way as to encapsulate that particular region. Great banknote designs are not merely cut-and-paste presentations of cultural icons; they are able to become cultural icons themselves – touchstones for a country’s specific heritage, mentality and experience. For a banknote designer, this feat requires more than just technical knowledge and an artist’s eye – it necessitates under­standing a culture to craft something truly distinctive, irrespective of tight deadlines and fast turnarounds.

A great example of paper money as a powerful cultural icon would be the US dollar. It earns this distinction not through innovation, but by its unwillingness to change. In spite of its inconsistency with hi-tech banknote production, every living human nevertheless recognises a US dollar note; it is shorthand for capitalism itself.

In complete opposition to the US dollar, the euro notes offer an example of design that consciously evades national identity. Only the lightest reference to European culture is presented – in the form of fictional architecture and bridges symbolic of “communication between the people of Europe”.[2] The rest of the notes’ artwork reverts to utilitarianism – every element, from the size of the numbering to the typeface, has been chosen with fast recognition and cross-border utility in mind.

Colouration is paramount in the visual communication of banknotes. But colours do not simply differentiate notes within a banknote family; colour combinations express the temperament of a culture. For example, Australia has always had bright multicoloured notes which impart the characteristic climate and biodiversity of the continent, coupled with a liberal, experimental impulse. After all, it was the Reserve Bank of Australia (RBA) who presented the world with the first polymer note in 1988.

In contrast, the bleached colours of the Faroe Islands’ notes tell of a windswept, subpolar region. The novel use of watercolour artwork is also wellchosen – not only do they add to the notes’ weather-conscious theme, they also convey the provincialism of a small island community.

The role of bespoke software
The standard tools of the banknote designer remain Adobe Photoshop and Illustrator, programmes that are adequate for providing colour, form and layouts. However, the actual securitisation of banknotes is done in programmes unavailable to the public, such as Jura, Corvina or Fortuna. A designer’s access and use of banknote securitisation software will depend on the company’s structure. In most cases, it is sufficient for the designer to provide the basis with Adobe software, with the designs being redrawn and securitised by a separate department.
However, when an inquisitive mind is allowed freedom with securitisation programmes, the full creative potential of this software shines, allowing for the generation of forms and patterns that would be impossible to create with publicly available software. Instead of the securitisation of banknotes being a paint-by-numbers process based on a diagram provided by the designer, both the design and securitisation can work as one seamless artwork.

A great example of this would be the Swiss 50 franc note (Figure 6). It would be impossible to create such artwork without the blending of conceptual design and bespoke securitisation software, working as one. RasterRise, developed specifically for the Swiss franc project, can “create a thematic microcosm within the security design.”[3] Consequently, the concept runs through every detail of the note, and no element has been left unrefined. The visual placement of each element is rather straightforward, but what makes this design extraordinary is that the articulation of these elements are securitised while harmonising across the design.
The new Swiss family highlights the creative promise in bespoke software. While up-to-date software is the essential tool of the designer, exponential advance­ments in open-source plug-ins have made mimics of securitisation software more available, albeit with limited functionality, and without the interface required for high-specification printing. Nevertheless, such programmes provoke the development of new security document software.

Postmodernism
The banknote landscape is as diverse as the cultures on the planet. The major economies retain fairly con­servative designs, so as to uphold the world’s trust. Smaller island nations, away from the world’s financial spotlight, tempt bold, and sometimes whimsical currency design.
With that said, a new generation of banknote design is seeing the influence of postmodernity, resulting in fresh, bold currency. Already mentioned is the new series of Swiss notes, which combine the absence of a portrait, highly-worked details, and a graphical, illustrative style to produce a postmodern series. In opposition to the Swiss franc, the design of the new Israeli shekel is pared down and clean. It tests the boundaries of minimalism in note design.

The new Norwegian banknote series are the boldest yet. The inspired use of pixelated imagery forces us to look closer to discern the picture, whilst being an aesthetically pleasing device in its own right. Far from off-putting, the note designs feed into a familiar, everyday digital aesthetic. The artwork lifts the obvious maritime theme into something Norges Bank rightfully calls “completely novel in international banknote design.”[4] Thus, as a business card, Norway’s identity as a nation intimately connected to the sea is married by bold technological progress.

New note designs continue to find subtle, yet no less innovative means of updating straightforward banknote designs. One example would be the latest series of Royal Bank of Scotland notes (Figure 9). The traditional landscape to the left of the portrait morphs into strips that vaguely reference a circuit board. The effect is incredibly subtle, yet this minor design choice helps to lift the otherwise conventional subject matter. The resulting designs retain the grace of tradition, whilst offering a fresh, contemporary upgrade.

The challenges and rewards of plastic
Polymer substrates have opened up new creative possibilities and challenges for designers. One challenge is the colour – unlike paper, where inks are absorbed into the substrate, polymer has a tendency to reduce the tonal impact of designs, as the inks sit on the surface. An experienced polymer note designer will foresee the visual impact of colours and combi­nations, and adjust accordingly. Designing polymer features requires rigorous research and development, an artistic mind, and a good dialogue between the two. Feature design is often subtle and complex, yet must be comprehensible for fast user verification. When the designer both understands each technical conundrum and the best forms to demonstrate the unique properties of the feature, the results can be visually stunning.
A pitfall of earlier polymer designs is the tendency for security features to appear ‘stuck in place’, without properly interacting with the rest of the design. Although a design team may inherit the polymer security feature specifications from another organisation, (which may include strict instructions for the size and location of features) the challenge for the designer is to work these immovable specifications into a seamless artwork.
In banknote design, the totality of the layers of produc­tion should blend together into a lucid, flowing image, and visual design is at its worst when individual elements are thrown together in order to satisfy tech­nical requirements. Indeed, the pleasure in solving each security document design puzzle is to find ways of concealing rigid methodologies in elegance.

However, as more plastic notes continue to be issued, we see more confident use of the sub­strate in the design process. In particular, we see transparent windows that run the height of the note, which unselfconsciously showcase novel security features. Excellent recent examples of this include the Canadian and Australian series. These elements are not mere substitutes for the watermark area; they make full use of the substrate’s properties.

Summary: the future of banknote design
As a designer, I’m interested in pursuing new print and software technologies, and exploiting the potential in these technologies to create novel design solutions. These technologies are sure to continue to develop. Data storage within imagery will imbue any artwork with a readable dimension, and new percussive forms of printing will further exploit the specific properties of the substrate.
My other duty as a designer is to always seek out innovative methods of visual communication. Because of the rarity with which banknotes are upgraded, and the risk in producing bold designs, innovation in bank­note artwork lags other fields with higher turnaround times. This means there is plenty of room for a bank­note designer to draw from the vast pool of present-day design modalities. These modalities will surely make their way into banknote designs, encouraged by bold central banks.
In considering the future of banknote design in general, I return to ‘Decus et Tutamen’, an ornament and a safeguard. We are seeing technology evolve at an expo­nential rate. The natural consequence of technological progression is for form and function to meld into one. In this sense, banknote design already symbolically prefigures the future of technological advancement. 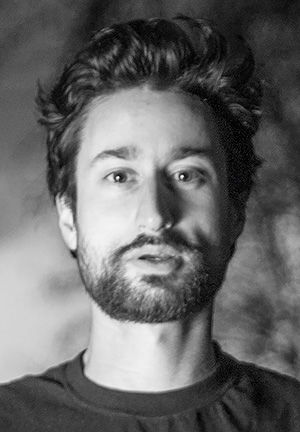 Tom Badley is an artist, designer and writer. He has worked on projects for countries in Central America, South America, and Eastern Europe, and upgrades for nations of Central Asia, Europe and Africa. As well as security print design, Tom Badley also lectures and writes articles on topics span­ning art, design, critical theory, philosophy and science.